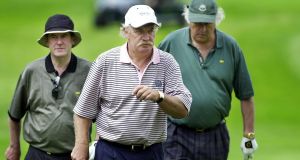 JP McManus, Dermot Desmond and John Magnier: trio are major shareholders in Barchester Healthcare, which was put up for sale earlier this year. Photograph: Eric Luke

Asian investors are among up to a dozen parties circling Barchester Healthcare, the UK care homes group co-owned by businessmen Dermot Desmond, JP McManus and John Magnier that was put up for sale earlier this year with a £2.5 billion (€2.8 billion) price tag.

The company, which runs more than 200 care homes and seven registered hospitals, has attracted indicative bids from a Singaporean sovereign wealth fund, Chinese investors and a unit of Australian banking group Macquarie, according to specialist publication Mergermarket.

Paris-based private equity firm PAI Partners and US real-estate investment trust Ventas are also reportedly in the mix as up to 12 parties have been invited to prepare offers ahead of a bid deadline on October 25th, according to the report.

The three Irish businessmen first invested in Barchester in 1994, a little over a year after it was set up by British entrepreneur Mike Parsons. Derrick Smith, a part owner of the Coolmore stud and racehorse breeding operation in Co Tipperary with John Magnier, is also a leading investor in Barchester, which had an average of 15,462 employees last year.

Barchester reported a 6.6 per cent increase on earnings before interest, tax, depreciation, amortisation and rent (ebitdar) to £174.1 million last year, outpacing a 4.8 per cent rise in sales, to £591.2 million, according to its latest set of annual accounts.

A spokesman for the company declined to comment on the sale process, which was launched in July and is being managed by US investment bank JP Morgan.

The four leading investors own Barchester through a Jersey-based vehicle called Grove Investments.

The UK care homes industry is currently an active patch for dealmakers. Private equity group Terra Firma moved last week to put 24 homes on the market for £225 million, two months after it won a court battle with hedge fund H/2 Capital over ownership of the assets.

HC-One, which has more than 300 homes across the UK, and smaller rival Care UK were put on the market earlier this year.

Barchester paid off a £900 million debt five years ago through the sale and leaseback of 200 British care homes to a property investment business, Ravenshill International, which was backed by private investors.