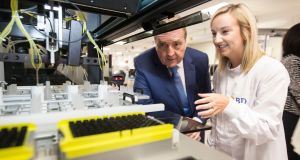 US medical device group Becton Dickinson will hire another 85 staff for its newly-opened R&D centre of excellence in Limerick.

The company has already recruited 100 staff for the facility in 2017 and early 2018 for the €21 million investment, in line with the jobs target put forward when the centre was announced in 2016.

However, opening the plant on Wednesday, the group’s senior vice-president for R&D, Dennis Gilbert, said Becton Dickinson (BD) would be looking for another 85 staff over the next 12 months.

“The first wave have delivered what they said they could do and the Government has delivered with the supports it promised,” Mr Gilbert said.

“You hope they deliver when you start a new operation like this,” he said. “There is really great talent here, better than we expected and they have got done all the projects they said they would. So we made the decision to move other projects here.”

He said he expected employment to continue to grow at the site in the National Technology Park. “BD is in Ireland for over 50 years but this is a new step, a large R&D presence. I’m very bullish to be here.”

The centre of excellence will focus initially on product and software development, clinical research instrumentation and prototype development, primarily for the company’s life sciences businesses.

Speaking at the formal opening of the facility on Wednesday, Mr Gilbert said the new roles were critical to BD’s long-term global growth plan,

“This new centre has been established to serve as a global R&D hub for our businesses and is key to our long-term strategic growth plans.

He said the company’s decision to open a global research centre in Limerick was taken on the basis of its strong relationship with local universities and the pool of “highly skilled talent” in the region, as well as “Limerick’s stellar reputation as an important life sciences hub”.

Becton Dickinson was one of the first US medical device companies to locate operations in Ireland back in 1964.

It has plants in Drogheda, Co Louth and at Pottery Road, in Dún Laoghaire. It first acquired a base in Limerick when it acquired a company called GenCell Biosystems in 2016. That facility employs 100 people.

4 Offers above €3.75m sought for prime residential opportunity in Killiney