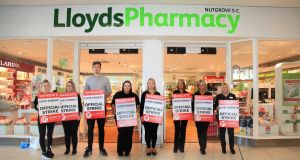 A dispute at Lloyds Pharmacy will escalate further this week with 240 workers in almost 40 stores due to participate in industrial action in a row concerning pay, zero-hour contracts and annual leave entitlements.

This Friday will see the fourth instance of strike action in this dispute and the first full-day stoppage.

“The strike takes place as the company continues to refuse to implement a Labour Court recommendation which stated that the company should allow their workers trade union representation,” Mandate said in a statement.

“This action comes as Mandate trade union escalates the dispute but continues to call for the company to engage in meaningful negotiations in order to prevent any disruption to the company, their workers and the public who depend on Lloyds Pharmacy for their medications,” the statement added.

As well as striking over pay, the workers are seeking the introduction of a sick-pay scheme, security of hours and improvements in annual leave.

Mandate’s David Gibney last week said strike action would continue until the pharmacy chain sits down with the union. He claimed workers in Lloyds are paid on average 30 per cent less than their colleagues in Boots.

Lloyds is one of the Republic’s largest pharmacy chains with 88 outlets across the country.

It is controlled by McKesson Europe – formerly Celesio AG – which also operates the Lloyds brand in the UK and is ultimately controlled by US-based Fortune 500 company McKesson Corporation.