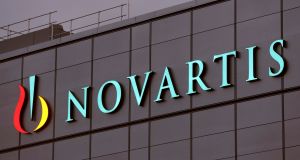 Shares in Novartis were up close to 4 per cent as investors welcomed the news. Photograph: Reuters

Novartis plans to spin off its Alcon eyecare business to shareholders and buy back up to $5 billion in stock as chief executive Vas Narasimhan refocuses the Swiss group on prescription drugs.

Shares in Novartis were up close to 4 per cent as investors welcomed the news.

Alcon, a legacy from former Novartis boss Daniel Vasella’s empire building, has been problematic since Novartis bought it for $52 billion in 2011, expanding into implantable lenses for cataract sufferers, surgical devices and contact lenses.

Its book value is now around $21.6 billion after having transferred its prescription eye drugs in 2016 to Novartis’s main medicines unit, but chief financial officer Harry Kirsch estimated it could rise by the time of the spin-off in the first half of next year to about $22-$23 billion.

Bank Vontobel analysts said the unit could be worth between $15 billion and $23 billion, adding its ongoing recovery would influence the final price.

Remaining goodwill at Alcon is $8.9 billion, but Mr Kirsch does not expect to have to make writedowns. – Reuters