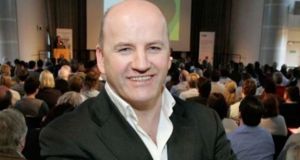 The company said it had acquired a 100 per cent interest in 4P Therapeutics for $1.9 million payable in both stock and cash. 4P Therapeutics will receive 250,000 shares and cash of $400,000 as part of the deal.

Once the deal is completed, 4P Therapeutics will become the pharmaceutical and development arm of Nutriband, Mr Sheridan said.

“This latest acquisition presents a great opportunity for us to grow in the transdermal space particularly as we add 4P’s products and IP to our pipeline and own our own R&D now,” he added.

Former Irish presidential candidate Sean Gallagher, who is also a founder of the home-technology company Smarthomes, and previously an investor on the RTÉ series Dragons’ Den, was appointed president of Nutriband in February.