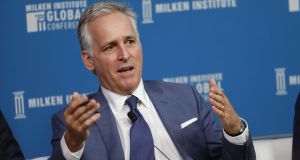 Richard Pops, chairman and CEO of Alkermes: The FDA may want the company to run several expensive new trials before it reconsiders its decision. Photograph: Patrick T Fallon/Bloomberg

Pulling success from the jaws of disaster is a fantastic plot twist. It’s just not always a good foundation for a biotech investment.

Angling for an unlikely happy ending for its depression drug, Irish biotech Alkermes hoped the FDA would ignore its failure of two Phase III trials in 2016 and would focus instead on a third, successful test. But the agency rejected the company’s attempt to file the drug for approval.

The FDA also may want the company to run several expensive new trials before it reconsiders.

There’s an established lexicon companies use to convince investors trial failures are just flesh wounds. It serves as a convenient set of red flags.

Bad trial results often get explained away by placebo effects or other confounding trends. The phrase “trends toward statistical significance” is trotted out. Regulators and investors are implored to consider the “totality of the data”. Post-hoc subset analyses are marshalled. High unmet patient need and the deficiencies of other treatments are used as smokescreens for mixed data.

Alkermes deployed a number of these defences for its results, at various points. It tweaked its third trial after its two initial failures and got some positive results. It has insisted to investors those were sufficient to warrant approval. But even those data were not pristine.

There are real grey areas in medicine; the line between statistical success and failure is often thin. The FDA has shown itself occasionally amenable to approving drugs for needy patients without rock-solid evidence of long-term effectiveness, especially when it comes to cancer drugs.

But now Alkermes has to go back to the drawing-board. There may be cases where wriggle room is warranted, but a twice-failed depression drug apparently isn’t one of them. Alkermes hopes to appeal the FDA’s decision and to avoid the need for more trials, but its chances are slim.