Novartis to buy AveXis in $8.7bn US gene-therapy deal 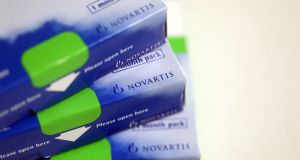 Novartis is moving further into gene therapy by buying AveXis for $8.7 billion, adding a rare-disease treatment that could reap billions in sales.

The acquisition reflects a surge of interest in biotech deal-making as large pharmaceutical companies seek promising new assets to boost their pipelines.

The $218-per-share cash deal announced on Monday represents a 72 per cent premium to AveXis’s 30-day volume-weighted average stock price. It is expected the transaction will close in mid-2018.

Novartis chief executive Vas Narasimhan, who took over in February, is flush with cash, having just agreed to sell his company’s stake in a consumer healthcare joint venture to GlaxoSmithKline for $13 billion.

The company said the acquisition would slightly dent core operating income in 2018 and 2019, due to research and development costs, before strongly contributing to profits in 2020 as sales accelerate. – Reuters