Shire may prove too big for Takeda to swallow 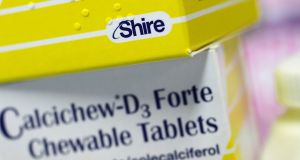 Is Takeda’s pursuit of Irish rare disease drug group Shire over even before it has properly begun? Photograph: Suzanne Plunkett/Reuters

Is Takeda’s pursuit of Irish rare disease drug group Shire over even before it has properly begun?

Japan’s largest drugmaker was flushed out into the open by Britain’s Takeover Panel this week, worried by market rumours. That it confirmed its interest, even though it has yet to submit a bid, clearly shows it is serious. Whether it can deliver is another thing altogether.

The two companies are almost the same size – judged by market capitalisation. And whatever slight advantage the Japanese group had was quickly wiped out by the bid premium that was quickly factored into Shire’s share price. Takeda stock, on the contrary, dipped 7 per cent as investors indicated their scepticism.

Part of the reason for that, apart from their size relative to each other, is concern over how Takeda would pay for any deal. Given the low cost of funds in Japan, raising capital would not be ruinously expensive.

However, Takeda is already carrying about $11 billion (€8.9 billion) in debt and CEO Christophe Weber – the first foreigner to lead the business – said after its most recent acquisition that the company was wary of getting overstretched, saying it was “very risk aware”.

That was after a deal worth just over $5 billion (€4 billion). Taking out Shire could cost 10 times that. And it needs to take account of Shire’s own heavy debt – closer to $20 billion (€16 billion) – before factoring in the amount it would need to borrow to create a $90 billion (€73 billion) drug major.

Analysts have suggested it would make more sense for Takeda to purchase parts of Shire’s business rather than the whole group but that moment may well have passed now.

Certainly the view among Japanese analysts is that a full acquisition of Shire is beyond Takeda. The drugmaker has until April 25th to make a definitive bid. The clock is ticking.

The problem for Flemming Ornskov and his team at Shire is that the public declaration of interest means they are now in the crosshairs. Even if Takeda is forced to back off, it seems only a matter of time before one of the big pharma companies steps in to capitalise on the work he has done in turning a fairly stolid business into a highly acquisitive rare disease specialist.