Shire size not an obstacle to acquisition, Takeda CEO says 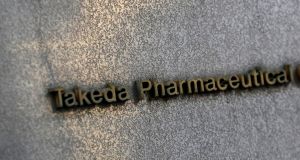 Takeda is not considering purchasing only some businesses or assets, Credit Suisse said in a note. Photograph: Kim Kyung-Hoon/Reuters

Takeda Pharmaceutical chief executive Christophe Weber is contemplating a deal for all of Shire, telling a select audience that size is not an obstacle to a “mindful” acquisition.

Takeda confirmed the meeting took place on Thursday with analysts from UBS Group and Credit Suisse, among others. Investors and journalists weren’t invited, and the Osaka, Japan-based company declined to confirm what was said, raising questions about the disclosure of potentially market-moving information in a closed-door setting.

A spokeswoman for Takeda said no new information was released about a possible takeover or merger, but Irish pharmaceuticals group Shire’s shares gained as much as 6.1 per cent on Thursday, closing up 3 per cent at 3,707 pence in London. In Tokyo on Friday, Takeda had the largest drop on the Nikkei 225 Stock Average, falling 5 per cent to the lowest level in more than a year.

Takeda is not considering purchasing only some businesses or assets, Credit Suisse analyst Fumiyoshi Sakai wrote. Shire hasn’t received any formal approach or offer, and Takeda has until April 25th to do so or walk away under UK takeover rules. Weber sees a deal, which could be worth as much as $50 billion, as an opportunity to accelerate Takeda’s growth, helping to transform Japan’s biggest drugmaker into a global leader, UBS Securities Japan analyst Atsushi Seki wrote.

“In a meeting in Tokyo, Takeda stressed their interest in Shire,” Sanford C Bernstein analysts wrote in a note. “We think the deal is likely because there is a willing buyer, willing sellers and room to meet both sides expectations.”

A survey showed Shire investors want £45 a share to close the deal, according to the Bernstein team. Investors also want less than half the purchase price to be paid in the form of Takeda shares, according to the survey.

Weber declined to comment on financing for a deal, UBS noted, but he reiterated his focus on maintaining Takeda’s dividend and investment grade. Concern has grown over how the Asian drugmaker would pay for a company whose $47 billion market value tops Takeda’s $37 billion. Shire’s stock has soared more than 20 per cent since Takeda’s announcement, widening the gap between the two companies’ valuations and creating a bigger financing hurdle for the Japanese company.

Credit Suisse analysts said in a separate note Wednesday that Takeda should be able to absorb the higher interest costs and earnings per share dilution from a new share issue to raise funds for the purchase.

For investors wondering if Takeda will abandon its Japanese roots for the UK, attracted by tax rates, former chief financial officer James Kehoe said it would be a mistake to change domiciles, UBS said in its note.

The Asian drugmaker will be disciplined in its approach to the takeover including on finances and purchase price, according to Credit Suisse. The Shire deal is just one option being considered to achieve Takeda’s 2025 strategy for growth, it said. – Bloomberg

4 Supply of Covid vaccine doses held up by manufacturing delays