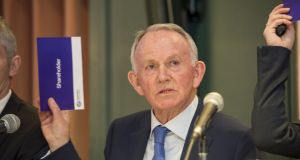 Former INM chairman Leslie Buckley, who is reported in court documents to have passed on confidential information to INM shareholder Denis O’Brien about communications minister Denis Naughten’s plans to refer the Celtic Media merger to the regulator. Photograph: Brenda Fitzsimons

Plans by Minister for Communications Denis Naughten to refer the proposed takeover of Celtic Media by Independent News & Media (INM) to the regulator, the Broadcasting Authority of Ireland, were relayed to Denis O’Brien, via then chairman Leslie Buckley, two months before they were made public, according to court documents. Simon Carswell and Mark Paul have the details.

Minister for Finance Paschal Donohoe is talking down prospects for a giveaway budget as new figures from his department point to sharply faster economic growth this year. Eoin Burke-Kennedy writes that €2.6 billion of new spending in Budget 2019 is already spoken for.

And staying with technology, Ireland is getting access to a new transparency feature that social media giant Facebook is rolling out in the wake of the Cambridge Analytica debacle, Elaine Edwards and Ciara O’Brien report. Fast-tracked here because of the looming referendum, it will allow all users see all propaganda advertisements being run by any group even if the user is not being specifically targeted by the ads.

Kevin Lagan is in the money after selling his Northern Ireland-based business to British building materials group Breedon for €527m. Ciara O’Brien and Fiona Reddan report that he retains control of his homebuilding business, Lagan Homes, and a modular construction company.

Press Up Entertainment, the pubs and restaurant group run by Paddy McKillen jnr and Matt Ryan is turning its eyes west, with Peter Hamilton reporting that the company has acquired a site in Galway that is earmarked for a 134-bed hotel.

A ruling in the European Court of Justice yesterday means airlines will no longer be able to deny passengers compensation in the event of wildcat strikes, triggered by management action, writes Barry O’Halloran. That’s all well and good but it is likely to little relevance in Ireland where wildcat action is mostly a thing of the past, certainly in the airline sector.

Shareholders in IPL Plastics – formerly One51 – will not face a six-month lock in following the company’s planned Canadian stock market flotation as IPL says it is going to organise a grey market for the shares in Dublin to facilitate long-standing Irish investors who might want to get out.