Figures are based on Apple holding IP in Ireland, but IMF says iPhone sales don’t fully contribute to Irish economy 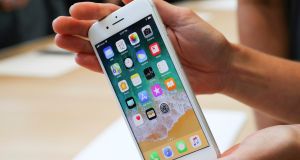 The iPhone 8 Plus. A new study from the IMF shows that sales of iPhones accounted for about 2% of Irish economic growth in 2017. Photograph: Jim Wilson/The New York Times

Exports of Apple’s iPhone accounted for a quarter of Ireland’s economic growth on a valued-added basis in 2017, a new study from the International Monetary Fund (IMF) reveals.

According to a study in the funds’ latest World Economic Outlook report, Ireland, alongside Korea and Taiwan Province of China, are estimated to be the main beneficiaries of the new tech cycle in value added terms.

While iPhones are not physically exported from Ireland, the gadget giant’s intellectual property is based here, which has led the authors of a report into smartphones and global trade to estimate that in value-added terms, iPhone exports accounted for 25 per cent of the Irish economy’s growth in 2017.

Overall, the Irish economy expanded by about 7.8 per cent in 2017, which means that iPhone sales would have accounted for a quarter of that, or about 2 per cent of overall growth.

Back in 2015 the economy was reported as growing by 26 per cent, leading some to claim it was a case of “leprechaun economics”, as the sharp growth rate was largely down to the onshoring of IP by firms such as Apple.

Since then, there have been efforts made to recalibrate how Irish economic growth is measured, in order to strip out some of the impact of multinationals.

In this respect the authors do add the caveat that the income from these smartphone sales “does not fully contribute to the Irish economy,” as the acquisition of foreign owned IP assets, “leaves domestic employment mostly unchanged”.

This compares with locations where smartphones are manufactured, such as Korea, where the production chain of smartphone rleated components is estimated to have contributed one-third of real GDP growth in 2017, while in Taiwan, the contribution is as high as 40 per cent.

The study shows that last year, global smartphone sales stood at close to 1.5 billion - or one for every five people on the planet. This resulted in smartphones contributing about one sixth of the estimated growth rate of global trade in 2017.

The growth was driven by an increase in prices - for example, the average cost of an iPhone rose from $618 in 2016 to $798 in 2017 - rather than in volume terms, as the number of smartphones sold fell for the first time on record last year.

Apple has a substantial presence in Ireland, employing some 5,500 people. Figures disclosed last year that some €119 million in Apple’s global sales are put through its Irish operations.