Divestment of the cancer business may be a deterrent for Takeda 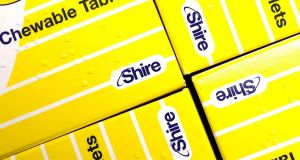 Two sources with direct knowledge of the matter said last week that Takeda had sounded out its major creditors for loans to fund a potential Shire bid. Photograph: Suzanne Plunkett/Reuters

Shire, the Irish rare diseases specialist that is a potential takeover target for Japan’s Takeda Pharmaceutical, is selling its oncology business to unlisted French drugmaker Servier for $2.4 billion.

The deal suggests there is value locked up within Shire’s portfolio – despite a dismal share price performance in the past two years – as its management braces for a possible $50-billion bid battle with Japan’s biggest drugmaker.

Shire said on Monday it would consider returning proceeds from the sale to shareholders through a share buyback and that further selective disposals of non-strategic assets were possible.

The divestment of the cancer business may be a deterrent for Takeda, since oncology was one of the areas it had highlighted as driving the case for a Shire deal, along with gastrointestinal medicine and neuroscience.

Still, given the small contribution of the cancer business to Shire’s overall profits, Deutsche Bank analysts said this was unlikely to be a deal breaker. A Takeda spokesman declined to comment.

Shire was at pains to point out that it started exploring the sale of oncology in December and commenced the disposal process in January, during which it identified multiple possible US, European and Japanese buyers.

Takeda’s interest in Shire was made public only at the end of last month. Under UK takeover rules, Takeda has until April 25th to announce whether or not it will bid for Shire, which has a market value of about $47 billion. Buying Shire would be transformational for Takeda but would be a huge financial stretch, since the company is now worth about $10 billion more than the Japanese group.

Shire also had debt of about $19 billion as of the end of 2017. The drugs industry has seen a surge in dealmaking this year as large players look for promising assets to improve their pipelines, but a Takeda-Shire transaction would be by far the biggest yet.

Two sources with direct knowledge of the matter said last week that Takeda had sounded out its major creditors for loans to fund a potential Shire bid.

Shire chief executive Flemming Ornskov said the sale of the oncology business to Servier demonstrated the value embedded in Shire as shares in the company rose 0.5 per cent as markets opened.

Shire is headquartered in Dublin but is listed in London and has most of its physical presence in the US.

Jefferies analysts said the sale “should boost Shire’s negotiating position on asking price in the current offer period with Takeda”.

Shire has long been seen as a likely takeover target and was nearly bought by US drugmaker AbbVie in 2014, until a US clampdown on tax-driven corporate inversions caused it to walk away. Ironically, Shire itself relocated its corporate headquarters to Ireland for tax reasons.

Shire has a track record of acquisitions, but its biggest ever deal – the $32 billion purchase of Baxalta in 2016 – was widely criticised by shareholders and has left it struggling to handle debt and integrate its various businesses. Its oncology business had sales of $262 million last year, putting the divestment on a respectable revenue multiple of 9.2 times.

For privately held Servier, acquiring Shire’s oncology operation allows it to establish a direct commercial presence in the United States and boosts its presence in cancer. Drugs being acquired include the two already marketed products Oncaspar for acute lymphoblastic leukaemia and rights outside the United States to Onivyde for pancreatic cancer. Servier also gets the experimental drug calaspargase pegol for leukaemia and an early-stage immuno-oncology pipeline. – Reuters