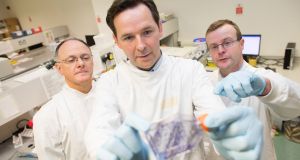 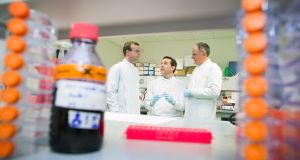 The Dublin company is working on a drug that it believes will give hope to women with treatment-resistant breast cancer.

Its IBL-302 molecule aims to shut down two separate pathways commonly used by cancer cells to spread. Much current therapy is focused on shutting down, or inhibiting, what is called the PI3K pathway.

The trouble is that when this pathway is blocked by cancer drugs, the cancer cells find other pathways to continue the spread of the disease. Researchers at the Dana Farber Cancer Institute in Boston suggested that targeting the PI3K pathway and a separate gene, PIM2, together could deliver therapeutic benefits, halting the spread of cancer for a while.

Inflection’s IBL-302 molecule is the only therapy currently targeting both these cancer pathways.

Inflection chief executive Darren Cunningham and his co-founder Dr Michael O’Neill found the drug in a pipeline of molecules that they licensed from the Spanish National Cancer Research Centre in 2013, having previously looked at the potential of up to 150 other options.

“It has taken us three-and-a-half years, including fund-raising, to get to this point,” says Cunningham. The next stage is getting the drug into patients in a phase I trial to test both safety and efficacy.

Prof Bryan Hennessy, a consultant oncologist and senior lecturer at the Royal College of Surgeons, who has worked on getting IBL-302 to this point, is excited about its prospects.

“Nobody else is looking at a drug like this,” he says. “We have been through a lot of preclinical work and it is quite advanced.”

Funding a phase I trial will cost in the region of €10 million and Cunningham, whose background is in business development at Elan, is confident of getting to that point within 18 months.

Inflection already has support from Enterprise Ireland and life science-focused venture capital group Fountain Healthcare. Michael Smurfit is another investor and his son, Michael jnr, sits on the board of the company. So too does former Merrion Pharma CEO John Lynch.

“The plan is to take this molecule with the dual mechanism into patients in a well-defined first in human study to show not only is it safe but that it is having an impact on patients with cancer.”

“It is about time. It should convert into a more durable and longer-term treatment effect which means patients live longer. We will only know when we get into the clinic how much longer that will allow a patient to live – whether that is six months, or a year or more.”

Assuming the phase I data proves positive, Inflection will then look at options to fund further development. At some point, Cunningham says, that will mean working with a larger pharma group that has the financial muscle and resources to conduct late stage clinical trial and commercialisation.

The opportunity is enormous. Cancer drugs that extend survival for just a few months generate billions of dollars a year, Cunningham notes.