GSK has fallen behind rivals in producing multibillion-dollar blockbusters 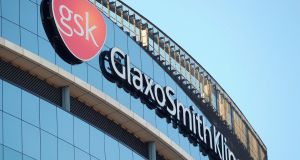 Tesaro brings to GSK a marketed product for ovarian cancer, Zejula, which belongs to a promising new class of medicines. Photograph: Toby Melville/Reuters

GlaxoSmithKline has agreed to buy US cancer specialist Tesaro for $5.1 billion (€4.5 billion), marking a major biotech investment by chief executive Emma Walmsley as she seeks to rebuild the group’s pharmaceuticals business.

GSK has lagged rivals in recent years in producing multibillion-dollar blockbusters and it largely sat out a spate of dealmaking by rival drugmakers under previous CEO Andrew Witty. That is a situation Walmsley now wants to change.

Britain’s biggest drugmaker is paying $75 a share for the business, an 110 percent premium to the 30-day average price. It is also taking on Tesaro’s debt. News of the lofty valuation sent GSK shares down 7 per cent on Monday.

Boston-based Tesaro has long been seen as a potential takeover target, with other suggested acquirers in the past including Switzerland’s Roche.

The definitive agreement to acquire Tesaro comes on the same day as GSK sold its India-focused Horlicks nutrition business to Unilever for $3.8 billion, freeing up cash for pharmaceuticals investment.

PARP inhibitors work by blocking enzymes involved in repairing damaged DNA, thereby helping to kill cancer cells, and they are a growing focus for drug research, with potential for use beyond ovarian tumours in breast, lung and prostate cancers.

For GSK, making Zejula work in wider population groups will be critical in justifying the high price it is paying.

Walmsley, who took over in April 2017, has made replenishing GSK’s medicines cabinet her top priority. She recently hired a business development executive from Roche’s Genentech, another signal of her readiness to make acquisitions.

“This is an example of us executing on what we said we were going to do ... to bring growth, pipeline, commercial capability and near-term catalysts,” she told reporters.

“We still will be open to other potential bolt-ons in business development,” Walmsley added.

Precipitous revenue slump, Deliveroo goes convenient; and data protection fears 06:38
Why we should be slow to use tracking apps in coronavirus response 06:00
Change of plan: How businesses are learning to reassess and reinvent 06:00
Opening doors again far from easy for business 05:55
Ireland’s financial reputation: this time it is different 05:41

1 Lockdown exit: How can Irish economy reopen without big health risks?
2 Amazon cargo aircraft using Belfast airport for North’s online market
3 Why we should be slow to use tracking apps in coronavirus response
4 Precipitous revenue slump, Deliveroo goes convenient; and data protection fears
5 Property market has not felt full impact of Covid-19, warns Sherry FitzGerald
6 Deliveroo branches into grocery deliveries in Ireland
7 Half of Irish SMEs expect revenue to fall by at least 60% in next three months
8 Finance ministers gather as fears grow even the future of the euro zone is at risk
9 I want to change my will quickly in case I fall ill. Do I need a lawyer?
10 Coronavirus: The online scams, apps and trends you need to know about during the pandemic
Real news has value SUBSCRIBE