Belfast pharmaceutical company did not recommend the payment of a dividend 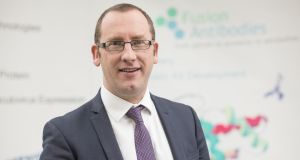 Fusion Antibodies CEO Paul Kerr said it had been a challenging period but company had ‘turned a corner’.

Established in 2001 as a spin out from Queen’s University Belfast, Fusion is a contract research organisation providing a range of antibody engineering services for the development of antibodies for both therapeutic drug and diagnostic applications.

Cash totalled £2.8 million at the end of September, down from £4.5 million. Orders and revenues for the period were described as “below expectations”. The board did not recommend the payment of a dividend to shareholders.

Fusion Antibodies chief executive Paul Kerr said it had been a challenging period but that the company had “turned a corner”.

“As we have previously announced, the first six months of the current financial year have been challenging due to increasing competition and consequential pricing pressures,” he said.

“However, order levels have started to accelerate in October and November and I am cautiously optimistic that we have turned a corner.

“I am pleased that the laboratory capacity expansion was completed on time and within budget, in August 2018, and the launch of the Rational Affinity Maturation Platform is on schedule for completion in December 2018.

“These important developments will reinforce our market-leading offering and enable us to resume growth of the business.”

Since 2012, the company has successfully sequenced more than 250 antibodies and successfully completed more than 100 humanisation projects for its international, blue-chip client base, which includes eight of the top 10 global pharmaceutical companies by revenue.