Growth in UDG to be ‘impacted’ by investments 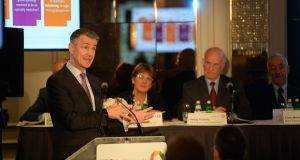 Irish healthcare service provider UDG expects growth to be “impacted by planned investments”. The comments came as the group reported full-year figures that beat expectations on earnings per share but disappointed on revenue.

The company, which does the majority of its business in the United States, was boosted by US president Donald Trump’s tax cuts, which helped reduce its effective tax rate from 22.2 per cent to 17.1 per cent. The US tax cuts and jobs act helped the group record an exceptional gain of $9.7 million (€8.5 million).

“There’s no doubt about it, the [US] population is ageing so the prognosis for new product launches has strengthened,” UDG chief executive Brendan McAtamney told The Irish Times, adding that the “market fundamentals are very attractive”.

Shares fell close to 12 per cent to a 29-month low at one point in London trading after UDG said its adjusted revenue for the year to the end of September increased 8 per cent to $1.32 billion (€1.16 billion), falling short of a $1.35 billion (€1.20 billion) estimate. But they later rallied to close just 3.95 per cent weaker.

Adjusted profit before tax was higher then expected, up 17 per cent to $138.8 million (€122.9 million), reflecting strengths in key businesses.

Dublin-headquartered UDG, which comprises two business arms – Sharp and Ashfield – completed acquisitions of up to $82.4 million (€72.9 million) during the year which, it said, would be drivers of earnings growth. It also disposed of a less important arm, Aquilant, during the year. The Aquilant disposal followed a currency impact as a result of Brexit and two big client losses.

Ashfield, the bigger part of the business which provides patient and communication services, recorded a fall in commercial and clinical gross revenue during the year though its communications business recorded 8 per cent underlying growth.

The “robust” performance was boosted by acquisitions and the company said the outlook remains “positive” as it continues to diversify its service offering.

The Sharp division, which provides contract packaging services, delivered increased revenue in the US of 5 per cent. That helped offset a 17 per cent fall in European revenue.

“After a challenging start to 2018, Sharp US generated substantial underlying operating profit during the second half of the year,” the company said. The European arm recorded a $1.1 million (€970,000) loss. The challenging start related to adverse weather among other factors, the company said. It was offset by double-digit growth in the final three quarters of the year, Mr McAtamney said.

“Looking ahead to 2019, we expect continued progress, both organically and through further strategic acquisitions. We expect good underlying profit growth in both Ashfield Communications and Advisory, and Sharp, particularly in the US,” Mr McAtamney said.

“In Ashfield Commercial and Clinical, we will continue to diversify and differentiate our service offering, although, in the short term, we expect there to be some ongoing softness.”

London-listed UDG recognised a goodwill impairment of $57.6 million (€51 million) related to the sale of Aquilant with total exceptional charges reaching $85.8 million (€75.9 million) after tax for the year.

UDG will give formal guidance for 2019 in January as part of its first-quarter trading update. “There are not going to be any surprises so our mid-term guidance is largely going to be unchanged,” Mr McAtamney said.

1 ‘I’m so lucky to be in the Caribbean – a million miles from Derry Girls’
2 ‘I left my home, my boyfriend and my dog and upped sticks’
3 Household savings soar as consumers stop spending
4 ‘Never mind GDP; the most fundamental job of any leader is to keep his people alive’
5 Joint accounts: if one of us dies, can the other access the money?
6 Roll up, roll up: capitalism will drive cannabis legalisation in Ireland
7 Ireland’s recovery is partially due to us learning our lesson
8 Hostelworld cancels dividend as it counts coronavirus cost
9 Explaining sudden arrival of €20,000 in my bank account
10 Ashford Castle hotel resort sold for €20m
Real news has value SUBSCRIBE