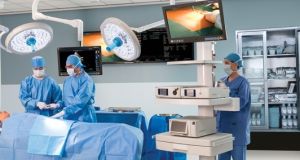 Steris has concerns over Brexit

Steris might not be a company that many have heard of until now, but it’s developing a knack for finding itself in the news.

The surgical equipment company, based in Derby in England, announced last week that it plans to relocate its corporate headquarters to Dublin – the latest fallout from the ongoing calamity that is Brexit. That move, which is subject to shareholder approval, comes just three years after Steris became the first US company to agree a corporate inversion deal after former president Barack Obama’s administration announced measures to clamp down on the practice in the face of losing Pfizer to Irish domicile.

Its $1.9 billion (€1.7 billion) cash-and-share takeover of Synergy Healthcare in November 2015 saw it relocate to Britain just seven months before the UK voted to leave the EU. Now, chief executive Walt Rosebrough says re-domiciling to Ireland was its “best path forward”. Speaking on a call, he said: “Simply put, significant benefits are at risk if we remain domiciled in the country that is no longer a member of the EU.”

Steris has always insisted the UK move was not determined by tax issues and he is citing concern about possible curbs on the free movement of EU citizens into the UK post-Brexit among the factors for the latest move. But the fact remains that it was paying an effective tax rate of 31.3 per cent in the US. That has since fallen to 20 per cent, a figure that will fall further should it relocate to Dublin. Its 12,000 employees include staff in Westport, Co Mayo and Tullamore, Co Offaly.

Like all good corporate card players, Rosebrough held open the prospect of staying put despite any shareholder approval if, for any reason, Brexit does not happen or is delayed. You can understand his caution but nothing suggests any imminent common sense on that front.