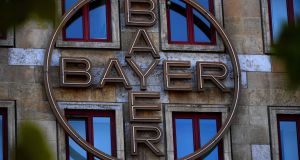 Bayer’s shares have suffered on the back of legal setbacks related to its acquisition of Monsanto. Photograph: AFP

Bayer, the German pharmaceuticals and chemicals group, has announced plans to cut 12,000 out of 118,200 jobs worldwide, in a bid to reduce costs and regain investor favour following a string of legal setbacks related to its Monsanto acquisition earlier this year.

The measures include a plan to exit the market for animal health products, as well as its Coppertone sun care and Dr Scholl’s foot care product lines. Bayer also plans to sell the group’s 60 per cent stake in service provider Currenta.

“Including the synergies expected from the acquisition of Monsanto, Bayer anticipates annual contributions of €2.6 billion from 2022 on as a result of its planned efficiency and structural measures,” the group said in a statement.

Werner Baumann, the Bayer chief executive, said: “With these measures, we are positioning Bayer optimally for the future as a life sciences company.”

The group’s shares have suffered a sharp decline in recent months, after a California court awarded $289 million in damages to a school groundskeeper with terminal cancer. The jury found that the man’s sickness was the direct result of his exposure to a widely-used weedkiller manufactured by Monsanto. The sum has since been reduced by a higher court, but analysts and investors worry that the avalanche of follow-up cases will be costly for Bayer all the same.

Bayer has had an operation in the Republic for almost 50 years and is based in south Dublin. – Copyright The Financial Times Limited 2018