Emergency medicines to be fast-tracked into State after Brexit 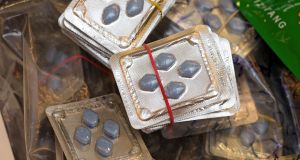 The Revenue Commissioners have made plans for emergency medicines coming into the State to be fast-tracked at customs entry points after Brexit. File photograph: Jason Clarke Photography

The Revenue Commissioners have made plans with the pharmaceutical industry for emergency medicines coming into the State to be fast-tracked at customs entry points after Brexit.

Pharmaceutical companies have been working to ensure that vital supply chains are not interrupted and there is a continued flow of medicines into the country should the UK crash out of the EU without a deal in March 29th.

About 60 per cent of medicines used in the Republic travel through or are sourced from the UK.

Revenue has told the Irish Pharmaceutical Healthcare Association that customs offices each have a “trade facilitation unit” where officers can be contacted about goods moving through ports.

“If emergency medicines are being imported to Ireland, the agent/company making the declaration [should] advise the trade facilitation in advance and if issues are encountered at importation, they would have a contact point to assist in the release of the goods,” Revenue told the industry body in recent days.

Oliver O’Connor, chief executive of the pharmaceutical association, said that Revenue wanted to ensure that “normal processes and good communications can handle any situations arising”.

Some medicines are temperature-controlled and have a short lifespan, which means they require rapid transit through customs clearance points at Irish ports and airports to avoid damage and disruption to supplies.

“You have a system in place to have a hotline at entry points, so if there is any delay on any time-sensitive products, you have the ability to call and cut through the administration stuff,” said Mr O’Connor.

Revenue said it was exploring a number of options under the EU’s customs code “to reduce the risk of medicines being selected for inspection at the point of import” and that it was willing to discuss these with the medicines regulator, the Health Products Regulatory Authority (HPRA), and pharmaceutical companies.

“It is important to note that the easiest way to ensure goods move efficiently is by providing information to Revenue in a timely manner and preferably well in advance of the arrival of the goods,” a spokesman said.

Revenue said the majority of inspections of medicines, medical devices and other health products take place at business premises before goods are released onto the market and do not take place on the arrival of the goods into the State from a non-EU country.

Mr O’Connor said pharmaceutical companies have not just looked at no-deal planning, but have taken general actions on supply chains and regulatory changes to cope with the UK becoming “a third country” outside the EU after Brexit.

The Government plans to unveil further details of its no-deal contingency planning on Thursday, as political divisions in London over the draft Brexit agreement increase the possibility of a disorderly exit.

The failure of British prime minister Theresa May to get her Brexit deal passed by parliament has led business groups to call on the Government to step up preparations for a no-deal Brexit.

The key issue for Irish business now is to get some certainty on how a no-deal scenario might play out in practical terms, according to Fergal O’Brien, head of policy at Ibec.

“It is entirely unrealistic that, in the unlikely event of a no-deal outcome, the rules of trade and business would change overnight at the end of March,” he said.

“Business urgently needs to have the certainty that, deal or no deal, there will be a transition period during [which] a new regime would be phased in.”

Due to the lack of certainty stemming from the postponement of the British parliament vote on the Brexit deal, many Ibec members are now pressing the button on very expensive contingency plans involving decisions such as carrying extra stock or acquiring additional warehousing in the UK market, he added.