Brexit stockpile: Favourite foods you might not know are British 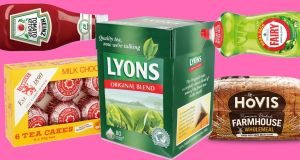 Time to stockpile your favourite UK-made goods, or switch to an Irish brand ahead of Brexit in March

We might be able to live quite happily without spam, spotted dick or Cornish pasties – but could you get by without Heinz ketchup, McVities digestives, Fever-Tree tonic or Hazelbrook Farm ice-cream?

If Britain crashes out of the European Union next March without a deal – like a reveller who decides to leave a party early, but first urinates all over the potted plants, and then argues about who should pay for the damage – the cost of some British-manufactured foods will probably go up after March next year.

In Britain, stockpiling for the Brexocalypse has taken over from Black Friday shopping as the consumer event of the year, with reports of everything from wine to tins of chilli con carne being hoarded in the name of #takingbackcontrol – but should we be doing the same?

Start clearing out the garden shed and the cupboard under the stairs. Or, better still, substitute your favoured British-made foods with Irish-made alternatives

The Economic and Social Research Institute (ESRI) warned earlier this year that a hard Brexit could cost each Irish household between €892 and €1,360 a year in rising prices. Of course, as the Government has pointed out, Ireland produces far more food than we eat, so despite what certain Tory MPs might have been hinting, we won’t actually starve. But we’re more partial to British food than we’d like to admit – about four billion times more partial.

In 2017, €4.1 billion (£3.7 billion) worth of British food and drink made its way into Irish homes, making us the UK’s number-one market for exported grub and beverages. The ESRI looked at 4,500 products in the Irish shopping basket and found that the price of bread and cereals in the Republic could rise by up to 30 per cent in a worst-case, hard Brexit scenario, where both non-tariff barriers and World Trade Organisation tariffs were applied.

With that in mind, here are some British-made foods you might want to stockpile, so start clearing out the garden shed and the cupboard under the stairs. Or, better still, substitute with an Irish-made alternative.

Lyons Tea
What? No! Yes, we’re afraid so. Lyons Tea started life as a family business in Dublin, but was bought out by Unilever, and is actually now manufactured in the UK. The ESRI has warned that the price of British-made coffee and tea could go up by 20 per cent in the event of a no-deal Brexit.

HB Hazelbrook Farm
Nope, not Irish either. It might be still named after the Rathfarnham farm where it started life 100 years ago, but Unilever bought the brand out, and the Rathfarnham plant closed in 2005. Every Irish Mammy’s favourite dessert is now made in Britain and, let’s face it, not the most stockpile-friendly. But there are plenty of Irish-made alternatives, including Gino’s Gelato and Dingle-based Murphy’s.

Biscuits
The cost of a nice sit down and a cup of tea with an iconic British bikkie could go up by as much as 27 per cent in the event of a hard Brexit. Since Irish people consume an estimated whopping €230 million worth of biscuits every year, you may want to consider hoarding your favourite McVitie’s Chocolate Digestive or Tunnock’s Tea Cakes. Or you could just buy Irish: East Coast Bakehouse and the Lismore Food Co are excellent, locally produced alternatives.

Fever-Tree tonic
If you’re of the hipster persuasion, you’ll be familiar with Fever-Tree, Britain’s fastest growing tonic. It is in the soft drinks category which, the ESRI has warned, could go up by 23 per cent in the event of a hard Brexit. An alternative is Poacher’s Well Tonic, Ireland’s first domestic tonic water, which is made with Irish spring water and bottled in Enniscorthy.

Heinz Ketchup
If you’re a ketchup-with-everything type, brace yourself. The ESRI has warned the cost of processed foods could go up by 15 per cent. Or you could buy Irish instead – Chef Ketchup is “made in Ireland to Chef’s secret recipe”. Three Men In A Trailer (TMT) Artisan Irish Ketchup is better still, according to aficionados, and is produced outside Tipperary, using all natural ingredients.

HP Brown Sauce
It might have been named after London’s Houses of Parliament, but these days, the classically British way to ruin – sorry, enhance – a perfectly good fry is made in the Netherlands, so the good news is that it shouldn’t be directly affected by post-Brexit increases. If you want to get it even closer to home, Chef does an Irish-made alternative.

Hovis Bread
No one wants a repeat of the chaos that ensued during last year’s Storm Emma. The price of British-made bread might go up in the event of a hard Brexit, but we’ve all since learned our lesson, and taught ourselves how to make soda bread, right? No? Well, there’s always Pat the Baker.

Fairy Liquid
Ireland’s favourite washing-up liquid – which made advertising history a few years ago, when its claim that it lasted twice as long as its rivals was found to actually be true – is made in West Thurrock, England and accounts for some of the €0.8bn of cleaning products and perfumes we import from the UK annually. Lilly’s Eco Clean is an Irish-owned alternative that’s also environmentally friendly.

Drugs
The Irish Government has said it is already making arrangements to stockpile drugs. But there’s no need for the rest of us to panic. As any Irish mammy will attest, as long as we have access to 7Up and Sudocrem, which has a longer shelf life than British membership of the EU and cures everything that flat 7Up can’t, we’ll be right as rain.

Walkers crisps
What’s the matter with you? We have one word: Tayto.