Glenveagh to sell 118 properties to Ires Reit for €38m 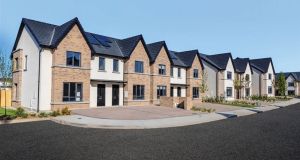 Irish homebuilder Glenveagh Properties said on Monday that it has agreed to sell 118 properties in north Dublin to Ires Reit for €38.2 million. The deal will bring the portfolio of Ires Reit, which is Ireland’s largest private landlord, above the 3,000 mark.

Ires Reit will acquire a combination of two-, three- and four-bed homes at Taylor Hill Balbriggan and Semple Woods Donabate, which are scheduled to be completed later this year, for an average price of €323,728.

Ires Reit said it will acquire 78 houses at Taylor Hill on the western edge of Balbriggan in north county Dublin. Prices start at €265,000 for a two-bed, rising to €450,000 for a four-bed detached at the development.

At Semple Woods, Ires Reit will acquire 40 houses. Prices have yet to be disclosed for this development, with a range of three-, four- and five-bed homes launched for sale this weekend.

Ires Reit said it expects the properties to be handed over turn-key by the end of this year, and will be fully rented by the first quarter of 2020. The two transactions are expected to generate a gross yield of about 6.7 per cent. As new builds, Ires Reit will be entitled to set market rents for the properties, and won’t be bound by Dublin’s rent controls.

“As a long-term investor in the Irish market, Ires continues its proactive agenda to add further supply,” said Margaret Sweeney, Ires Reit chief executive, adding that the forward purchase deal will bring Ires’ portfolio to 3,013 (including 282 units due by 2021 under forward purchase agreements).

Glenveagh, the Dublin and London listed developer also said on Monday that it has entered into a pre-let transaction with UK hospitality group Whitbread for a proposed 250-bedroom hotel at Castleforbes in Dublin’s Docklands. Whitbread is the UK’s largest hospitality group, and owns Premier Inn as well as Beefeater, Brewers Fayre, Table Table and Bar+Block. The zoning for the site requires it to be developed as a mixed-use scheme and its understood that Glenveagh will also build about 650 apartments on the site.

“Securing a strong counterparty like Whitbread with a robust institutionally accepted covenant will add value to the overall project and provide Glenveagh with flexibility in the context of future exit options for Castleforbes,” the company said.