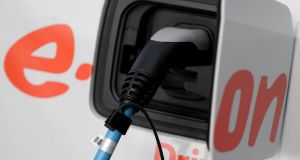 With half the energy consumed in the Republic still coming from petroleum products, oil importers have taken additional steps to ensure there will be no disruption to supply in the event of a disorderly Brexit, writes Charlie Taylor.

Charlie also tells ust that business sentiment tumbled this month on the back of renewed concern over a disorderly Brexit with households also remaining jittery about the outlook for the economy.

London-headquartered alternative investment specialist Trium Capital has become the latest asset manager to establish a base in Dublin as it looks to “Brexit-proof” its business, reports Charlie Taylor .

Non-bank lender Finance Ireland grew its pre-tax profit by 27 per cent in 2018, as it produced record new lending of €491 million. Peter Hamilton reports.

Ireland’s first private fast charging point opens this week at the Four Seasons hotel in Monaghan. The location of the 50kW rapid charger is meant to offer an alternative to motorway service stations for electric car owners. Neil Briscoe reports.

Twelve business leaders are in contention for The Irish Times Business Person of the Year award. Peter Hamilton profiles the contenders as well as the shortlisted candidates for company of the year.

Pilita Clark wonder why is that when women crack jokes whilst given a speech they are deemed to be much less serious then their male peers who are lauded for their humourous asides.

1 Chris Johns: Economies may enjoy ‘roaring twenties’ if ministers learn lessons
2 Wet pub openings fuelled rise in Irish Covid infection rates – report
3 How long can Government afford to keep State pension age at 66?
4 Basic income for all: Has the Covid crisis given us a new economic model?
5 Irish designer of Oxford vaccine: ‘I’ve never worked so hard in my life’
6 Promontoria barred from pursuing doctor over Ulster Bank loan
7 Only way is up for Stripe as valuation skyrockets
8 Admission of mistake in Oxford vaccine dose raises doubts over reliability
9 We continue to ignore massive pensions elephant in the room
10 ‘I don’t need to do any of this. . .I don’t actually need to work.’
Real news has value SUBSCRIBE