Why being funny is no joke for women

Pilita Clark: in a presentation female humour seems to be seen as more disruptive and male more helpful 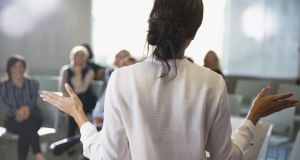 A new US study shows something quite alarming: making jokes in a work presentation helps men but hurts women

The other night I went to see something in London that has become an odd sensation: a woman telling other women how to speak in public.

The place was packed. At the back it was standing room only. On the stage was Viv Groskop, a stand-up comedian and executive performance coach who has written a book called How to Own the Room: Women and the Art of Brilliant Speaking.

Groskop has done more than 50 events around the UK since the book was launched in November. Business breakfasts. Literary festivals. A talk for staff at Google. Another one with Facebook and two 150-seat public “masterclasses” that both sold out in days.

A podcast based on the book has been a hit, and later this year Groskop is off to speak in Bermuda, Finland and Washington DC.

Her success makes sense. More women are becoming executives, and as she says most books on public speaking “have been about men, by men and for men”.

The night I saw her the room was full of business women who were under 45 and desperate. As in desperate to know how to cope with the horror of public speaking.

“I get really shaky,” said one.

“I just completely forget my train of thought,” said another.

I felt for them all. I can still remember my own pathetic early efforts, when I would wobble up to the stage wondering if I was about to vomit, faint or keel over with some sort of coronary incident. The only thing that ever helped was practice. As Groskop says, “doing it over and over and over is the way to get good at it”.

Yet I suspect there is another reason people are keen to see her. They think she will be funny. And they would quite like to be funny themselves the next time they speak in public. Who would not? Anyone who tells a warm, engaging joke is already on the way to owning the room. Or so I thought until I came across a new US study that showed something quite alarming: making jokes in a work presentation helps men but hurts women.

When I rang one of the authors, Jon Evans, a leadership researcher at the University of Arizona, he said his interest in the idea had been prompted by a woman. A senior female executive he was interviewing had surprised him by saying she was “careful not to be humorous” because she thought it could be damaging.

That raised a question: since humour can be seen as good or bad at work – a helpful diffuser of tension or a disruptive distraction – do gender stereotypes affect how jokes are interpreted?

To find out, a male and female actor were each filmed separately as they pretended to be a store manager delivering quarterly results, first dead straight and then with jokes thrown in.

We are not talking thigh-slappers here. Gags included advice from a spouse about the manager’s presentation the night before: “Whatever you do don’t try to be too charming, witty, or intellectual. Just be yourself.”

Still, when study participants watched the videos they gave the funnier version of the male manager higher ratings for his leadership and status than the joke-free model.

For the woman, it was the opposite. She was deemed a poorer performer and marked down for trying to “to cover up her lack of real business acumen by making little jokes”. In other words, female humour seems to be seen as more disruptive and male more helpful.

What are we to make of this? Probably not too much. At least one other study has found female leaders skilfully deploy humour to portray themselves as effective leaders, albeit in New Zealand more than a decade ago.

But context matters too. Evans says his research findings only apply to first impressions. Women making jokes to people who know them may get away with more.

Even if they can’t I will not be adding Evans’ findings to the list of things a female speaker already worries about. It is fine to know about stereotypes. It is finer to plough on past them.

In fact, the next time I see a woman telling a joke in a presentation, now that I know what she is up against I will be giving her even more points for trying.

1 Over 400 complaints from migrant workers at meat plants lodged with WRC
2 Avoca warns of redundancies due to coronavirus
3 John FitzGerald: Exchange rate control no panacea for economic crisis
4 National Broadband Plan customers to get download speed boost
5 Ufurnish: ‘It’s like Skyscanner, but for furniture’
6 Grounded Aer Lingus pilots develop fix for turnaround glitches
7 Moving in and out of lockdown is a recipe for economic disaster
8 Hozier and Taylor Swift lift Universal Music Ireland’s sales to €20m in 2019
9 ‘Saudi Arabia is where the opportunities will happen in future’
10 Fortnite maker Epic goes to war with Apple over App Store ‘monopoly’
Real news has value SUBSCRIBE