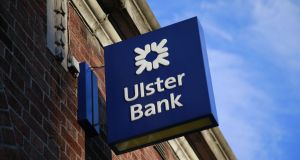 Ulster Bank has been allowed by the Central Bank to return €3.5bn of surplus capital to RBS over the past four years, the equivalent of about a fifth of its parental bailout bill during the financial crisis. Photograph: Nick Bradshaw

US investment firm Cerberus is looking at making an approach for Ulster Bank’s €20.5 billion loan book in the Republic as the lender’s UK parent actively considers exiting the market, according to sources.

A spokeswoman for Ulster Bank’s owner NatWest said, however, that no talks were taking place with Cerberus.

It is understood that Cerberus, among the most aggressive buyers of distressed loans in Ireland and across Europe in the past six years, is assessing the possibility of bidding for Ulster Bank’s entire loan book should NatWest decide to put the business into wind-down.

However, in the event of a deal it is likely the US fund would subsequently seek to sell on performing elements of the book – which comprise most of the loans – to other banks in the Irish market and hold on to problem assets. The Covid-19 economic crisis is expected to result a spike in non-performing loans (NPLs) across the sector.

A spokesman for Cerberus, which has bought billions of euro of soured loans from Ulster Bank in recent years, declined to comment.

The Irish Times reported on September 18th that NatWest, formerly known as Royal Bank of Scotland (RBS), was actively weighing a wind-down of Ulster Bank in the Republic. It comes as Covid-19 has added to the problems of the lender, which has struggling for years with high costs and low profitability.

NatWest has also been mulling the merits of merging the business with another lender, though this is said to be a less likely outcome. While there has been speculation in Dublin financial circles that a decision could be made in October, it is understood that it will take longer.

A sale of the loan book in one transaction may be attractive to NatWest if it decides ultimately to close its unit in the Republic as it would accelerate the process and allow it to pay off depositors and extract excess capital in the business.

Ulster Bank has been allowed by the Central Bank to return €3.5 billion of surplus capital to RBS over the past four years – the equivalent of about a fifth of its parental bailout bill during the financial crisis.

However, it is still being forced to hold a capital reserves ratio of about 26 per cent, double what most banks have as a target.

Bank of America Merrill Lynch analyst Alastair Ryan highlighted in a recent note to clients that NatWest may be able to release £1.52 billion (€1.68bn) by exiting the Irish market.

“In the meeting Jane reconfirmed her mandate as chief executive is to grow the bank and clearly stated that this has not changed,” the FSU told Ulster Bank members in a note sent on Thursday, seen by The Irish Times. “However, she confirmed there is an ongoing review of all bank strategy.”

The union wrote this week to directors of NatWest, including group chief executive Alison Rose, as part of a campaign to “save” the Irish lender.

The union has secured signatories from the Irish Congress of Trade Unions, the Irish Farmers Association, Mandate trade union, the Irish nurses and midwives’ organisation, the union Unite and opposition political parties as it builds a “broad coalition” seeking to convince NatWest to keep Ulster Bank’s doors open.

“Ulster Bank has a long association with its customers and communities across Ireland, and plays a key role in personal, business and digital banking. It provides local jobs for 3,000 people in towns and cities throughout the island of Ireland, some 2,400 of which are in the Republic of Ireland, through its 88-strong branch network,” said FSU general secretary John O’Connell.

“It supports our farming sector and small and medium enterprises in their growth, and as such plays a vital role in our economy. In some communities, it is, to its credit, the last bank in town.

“A decision to close the bank would have a devastating impact, economically, socially and individually, on customers, communities and staff.”

On Friday, Mr O'Connell said he had written to the directors of the board of NatWest to request a meeting.

“NatWest has stated clearly in the last few weeks that it is undertaking a strategic review of Ulster Bank operations in the Republic of Ireland,” he said.

“The FSU has written to the directors of the board of NatWest, the parent company of Ulster Bank, to request a meeting and to ask them to state clearly their commitment to Ulster Bank and to its customers and staff.”

He said NatWest chairman Howard Davies responded to the letter, saying: “In the event of any changes being made to our strategy for Ulster Bank, these would be undertaken with full consideration of impact on all of our stakeholders, including customers, colleagues, shareholder and of course you and your members.”

Mr O’Connell said: “There is a hollow ring about these words now as rumours abound about a possible sell-off of the Ulster Bank loan book to a vulture fund.

He added: “This is not the first time that Ulster Bank has been in talks with Cerberus. In 2018, it agreed to sell a €1.4 billion portfolio of distressed Irish home loans to them.

“Commenting on the 2018 sale, the then Fianna Fáil finance spokesman and now Minister for Public Expenditure and Reform Michael McGrath was widely quoted in describing Ulster Bank as ‘outsourcing its dirty work to a US vulture fund.’

“I call on the board of NatWest to immediately provide clarity on this situation. I also call on the Irish Government to contact NatWest today to seek clarity for staff and customers and to advise them that the day of vulture funds cherry picking Irish banking at the expense of customers, communities and staff are gone.”