Latest restrictions block bonuses, dividends as firm is probed over how it checks credit 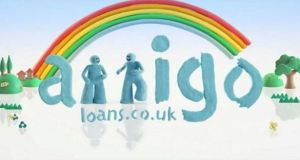 Amigo Holdings, which is embroiled in a dispute with its founder, has entered an asset voluntary requirement (AVR) with Britain’s financial watchdog, meaning the subprime lender will need approval to transfer assets outside of the group.

The move also means it needs approval to pay bonus payments to company executives and dividends to shareholders, Amigo said.

The firm, which provides loans to borrowers who struggle to obtain credit from mainstream lenders if a friend or family member can act as a guarantor for them, is being investigated by Britain’s Financial Conduct Authority over how it assesses the creditworthiness of customers.

Amigo also has an Irish operation, and started lending here in February 2019, targeting people with “bad credit”, who have been turned down by traditional lenders, and offering loans of up to € 5,000 at an annual rate of 49.9 per cent.

Amigo’s shares slid 25 per cent on Monday as investors took in the latest setback in a turbulent 18 months for the lender, which is facing regulatory probes into its business and a spat with founder James Benamor who has lobbied to be reinstated as CEO.

Amigo reported an 83 per cent fall in first-quarter profit in August and a 32 per cent drop in revenue.

Its shares have plunged 97 per cent since June last year.

Benamor last month lost a shareholder vote that would see him reinstated to run the company he founded in 2005, and he afterwards said chief executive Gary Jennison should be allowed to show what he can do to turn the firm’s fortunes around.

The company on Monday said it had adequate liquidity to continue to fund operations and support its customers. – Reuters