UK will have ‘no greater ally’ than State in Brexit talks, says Coveney 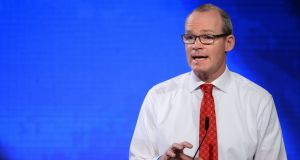 Simon Coveney: “We have achieved good progress in a number of these areas, but there is still considerable work to do. And that is particularly the case for the Border.” Photograph: Dara Mac Dónaill

Minister for Foreign Affairs Simon Coveney has vowed that the UK will have no greater ally than Ireland when London begins talks with the European Union on transition arrangements and a future relationship deal post-Brexit.

Speaking at Financial Services Ireland’s annual dinner in Dublin on Thursday, Mr Coveney reiterated his view that the UK needs a transition period of up to five years after quitting the EU in March 2019.

Mr Coveney said that a lot of work must be done before EU leaders meet in December, following six rounds of Brexit talks to date, to decide whether sufficient progress has been made on three key issues: citizens’ rights; the UK’s divorce bill; and Irish-specific concerns, before phase two talks on future arrangements can commence.

“Our overall priorities on the phase-one Irish issues are clear: to protect our peace process; to prevent the return of any hard Border; to ensure the continued full implementation of the Good Friday Agreement and all associated EU and other rights; to protect and develop North-South co-operation; and maintain our common travel area,” Mr Coveney said.

“We have achieved good progress in a number of these areas, but there is still considerable work to do. And that is particularly the case for the Border.”

Mr Coveney said it is “difficult to marry” the UK’s aspiration to have an invisible Border between the Republic and the North with its “contradictory ambitions” to see all parts of the UK depart the single market and customs union.

“The best mitigation would be for the UK as a whole to remain within the single market and customs union, or something very similar,” Mr Coveney said. “I remain convinced that this is overwhelmingly in the economic and other interests of people across our two islands.”

He said he will be reiterating this point to UK foreign secretary Boris Johnson when they meet in Dublin on Friday.

Meanwhile, Mr Coveney expressed hope that the Republic will be successful in its bid to replace the UK as the home of the European Banking Authority (EBA) post-Brexit, as 27 European affairs ministers vote on the matter in Brussels on Monday. Dublin is one of eight EU cities vying to accommodate the EBA.

“I’m hoping we have better luck than with our Rugby World Cup bid,” Mr Coveney said. “Securing this agency would only further enhance our standing as a leading global financial centre and would help secure further business into Ireland.”

A new report on financial service employment in Ireland, published in conjunction with Accenture, is expected to show that some 40,125 were employed in the sector in 2015.