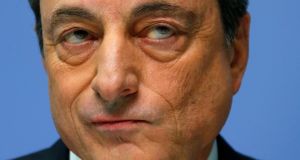 ECB president, Mario Draghi. The ECB is echoing comments from the EU banking watchdog last month, which warned firms could not set up mere ‘shells’ with no real substance to retain access to the single market after Brexit. Photograph: Reuters

The European Central Bank’s supervisory arm has criticised banks’ Brexit relocation plans for leaning too far toward the ‘empty shells’ regulators have cautioned against.

“Some elements in a number of banks’ plans do not fully meet the ECB’s expectations and requirements of banks operating in the euro area,” the ECB’s Banking Supervision division said in a newsletter posted on its website.

“It is not straightforward to draw a line between a well-established bank that is integrated into an international group and an empty shell that is overly reliant on group entities in third countries”, it said. “Still, some of the relocation plans submitted seem to lean towards the latter.”

The newsletter echoes comments from the EU banking watchdog last month, which warned firms could not set up mere “shells” with no real substance to retain access to the single market after Brexit.

The ECB Banking Supervision division also reinforced comments by the European Banking Authority that there should be proper risk management based locally, and sufficient local capital if an EU entity wanted to book so-called back-to-back trades with one of its other group entities based outside the EU.

The division was “not comfortable” with proposals from a number of banks, which had indicated they wanted to transfer all market risk to a third-country group entity, it said. Such an approach “could create risks in crisis situations where local capabilities may be crucial to continue operations”, as the recent past had revealed.

Instead, banks will be expected to have permanent local trading capabilities and local risk committees, and engage in trading and hedging risk with diversified counterparties - not just within their group. Staff would have to be in place locally and be physically present in the euro area rather than spending most of their working time in a third country, it added.