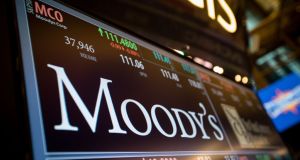 Moody’s said Bank of Ireland’s provision of a further €150 million to €175 million to cover refunds, compensation and other costs relating to the overcharging of mortgage customers will wipe out 70 per cent of its fourth-quarter pretax profit.

Bank of Ireland’s move last week to identify a further 6,000 customers hit by an industry-wide tracker-mortgage controversy raises questions about the numbers acknowledged by other lenders, according to a leading credit ratings agency.

Moody’s said on Thursday that Bank of Ireland’s decision to book a further €150 million to €175 million provision to cover refunds, compensation and other costs relating to the overcharging of mortgage customers will wipe out 70 per cent of the lender’s fourth-quarter pretax profit. The amount is in addition to €25 million set aside last year.

The increase came as the bank conceded an additional 6,000 customers had either been wrongly denied a low-cost mortgage linked to the European Central Bank benchmark rate, or put on the wrong rate. The bank had previously outlined that 4,300 customers had been impacted by the issue going back as far as almost a decade, including 600 who would have been entitled to a tracker rate.

“Although the additional provisioning seeks to settle this conduct issue for BoI, in our view a risk of further provisions remains,” Moody’s said. “The inclusion of a significant number of additional customers for compensation is credit negative for other banks in Ireland because it raises questions about whether other lenders affected by the review will revise upwards their provision amounts.”

Eleven current and former Irish mortgage lenders have acknowledged up to 27,527 cases of overcharging stemming from an examination ordered by the Central Bank two years ago. The figure has risen sharply in recent months as a result of regulatory and political pressure on banks.

The five main lenders involved – Bank of Ireland, AIB, Permanent TSB, Ulster Bank and KBC Bank Ireland – have signalled that the controversy will cost up to €800 million to resolve. That’s the amount of provisions they have either set aside – or plan to book – to cover customer refunds and compensation and other costs involved in the industry-wide examination.

KBC Bank Ireland said on Thursday that it had taken a €54.4 million provision for the controversy in the third quarter of this year, in addition to €4.4 million set aside in 2016.

1 Remote working doesn’t suit everyone, and it exposes woolly leadership
2 If you think governments are spending money now, just wait
3 ECB orders banks to freeze dividends and share buybacks
4 Dublin software company Workhuman ‘on course’ for €1bn valuation
5 Will Covid-19 force Primark to rethink decision not to sell online?
6 First look: Huawei’s P40 Pro – are you ready for a Google-free life?
7 Can husband keep savings and half the house in divorce?
8 Lavazza stirred, not shaken, by Starbucks challenge
9 British exceptionalism backfires in style as Johnson tests positive for coronavirus
10 Wetherspoon suspends payments to suppliers in Republic
Real news has value SUBSCRIBE