The Irish Times Business People of the Month: Noel and Valerie Moran 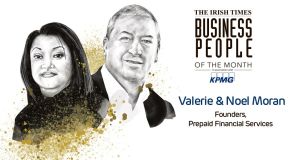 Meath-based entrepreneurs Noel and Valerie Moran, the founders of payments company Prepaid Financial Services (PFS), have been chosen as The Irish Times Business People of the Month for November, an award run in association with KPMG.

The couple sold Prepaid Financial Services last month in a deal that will give them a payout of up to €266 million. In total, the company was acquired by Australia’s EML Payments for €327 million.

Founded at their kitchen table in London in 2008, PFS became one of Europe’s largest issuers of e-money with a presence in 25 countries. Aside from its Irish base, where it employs more than 140 staff, the company has offices in Malta, London and Manchester.

The sale tops off a positive year for the Morans with PFS being granted an e-money licence by the Central Bank of Ireland in April to add to its regulation by the Financial Conduct Authority in the UK.

While Noel and Valerie had plotted expansion in any event, the deal with EML gives PFS access to more markets. The Irish business will now be able to piggyback on its parent company’s Australian and US licences, thereby expanding its global presence.

Elsewhere, the couple are making strides with another business – Ecomm Merchant Solutions – while also developing a €50 million fintech hub in Noel’s home county.