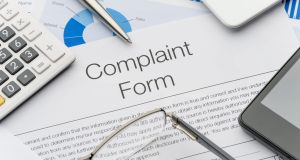 Just eight out of 25 formal complaints against banks over their handling of the tracker mortgage issue were upheld by the sector’s watchdog last year, with compensation in one case reaching €52,500.

The Financial Services and Pensions Ombudsman (FSPO) dealt with 25 complaints by way of formal investigation last year with eight either fully, substantially or partially upheld. The ombudsman deals with complaints after they have initially being heard by the banks involved, but resolution hasn’t been reached.

The FSPO deals with a wide range of complaints relating to insurance, banking, credit facilities, investments and pensions. The formal investigation procedure does not occur automatically. In total, the ombudsman dealt with 516 complaints over the tracker issue, many of which were resolved before being elevated to the formal level.

Of the eight cases that completed formal investigation and were were upheld, three related to unhappiness over the level of compensation offered by the bank. Aside from complainants Fergus and Niall, who were awarded €52,000, another complainant received €4,500.

In relation to a complaint where individuals known as Padraic and Beth sought to have their tracker mortgage restored, the ombudsman directed the bank to restore the rate, repay the interest the two had overpaid and pay €2,500 in compensation.

The loan in that case had been sold by the bank to a third party financial services provider and the bank was directed to make arrangements with the purchaser of the loan to ensure the complainant continued to benefit from the correct tracker rate for the remainder of the mortgage.

Some 17 complaints for which legally binding decisions were issued were not upheld in this round.

Eileen and James were given the option of applying for a tracker in 2004 but instead applied for a discounted variable rate loan. It was clear from the contract, the ombudsman found, that the loan would revert to the “appropriate variable rate”when the arrangement expired in 2006. As a result, the bank was under no contractual obligation to offer them a tracker and the ombudsman did not uphold the complaint.

Since its foundation in 2018, the FSPO has dealt with more than 1,800 complainants in relation to the tracker issue alone. At the end of 2019, it had 1,152 tracker complaints on hand. Last year, 516 complaints relating to trackers were closed by the ombudsman, with 264 closed after being resolved through informal mediation.

The FSPO deals with complaints informally at first by listening to both parties and engaging with them to facilitate a resolution that is acceptable to both. When those interventions don’t resolve a dispute, the FSPO investigates the complaint and issues a legally binding decision on both parties which can be appealed to the High Court. Only five of the 439 decisions issued in 2019 have been appealed.

The ombudsman can direct a financial service provider to pay compensation of up to €500,000 to a complainant.