Podcast: There is 'little appetite' for lifting bankers’ salary cap

Pay restrictions on AIB, BoI and PTSB could be lifted if tests are met, says Brian Hayes 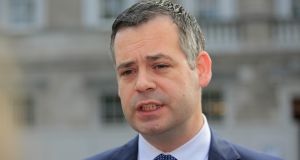 Pearse Doherty: ‘It’s a very clever argument by Brian Hayes and that’s why he’s been recruited into the position as the spokesperson for bankers.’ Photograph: Gareth Chaney Collins

Brian Hayes, the former Fine Gael politician who recently took over as chief executive of the Banking & Payments Federation Ireland, has said three tests should be met before the Government lifts the pay restrictions that apply to AIB, Bank of Ireland and Permanent TSB, and that these could be achieved probably over a period of two to three years.

However, Sinn Féin’s finance spokesman Pearse Doherty said the €500,000 salary cap imposed and 89 per cent tax rate on bonuses should be retained, and reiterated his view that AIB should remain in majority State ownership.

Their views come in the wake of the Minister of State for financial services Michael D’Arcy saying this week that the pay cap should remain in force.

In an interview with Inside Business, a podcast from The Irish Times, Mr Hayes set out the three tests: “The first test would clearly be that we’ve gotten beyond the tracker examination and all of the penalties and fines on the banks have been resolved [by the Central Bank of Ireland].

“Secondly, where we’ve clearly made progress in terms of the culture and code of conduct agenda. Thirdly, that we’ve made progress, or at least are on the road to making progress, on a personal accountability regime. Those . . . are important tests.”

Mr Hayes said that over “two or three years I would like to see some progress, some possible unwinding of these issues”.

However, Mr Doherty said there was “little appetite” within the Oireachtas for changes to the pay restrictions, and he was not ready to “wave the white flag” on this thorny issue.

The Sinn Féin TD dismissed Mr Hayes’s three tests. “He’s created three conditions which are already happening . . . And he’s set them up on behalf of the industry to say that when these three things happen, everything is going to be okay and let’s bring back the bankers’ bonuses and let’s go back to where we were 10 years ago. It’s a very clever argument by Brian Hayes and that’s why he’s been recruited into the position as the spokesperson for bankers. [ But] it’s important that we remember what happens when you incentivise those types of risk.”

Mr Doherty also called on the Minister for Finance Paschal Donohoe to publish the Korn Ferry review on bankers’ pay, which was commissioned by the Government last year and given to the Minister about a month ago.

“It should be published without delay . . . The debate [on bankers’ pay] is taking place in the absence of having this report, so the Minister should publish it immediately and have a proper discussion about the recommendations.”

Mr Doherty also reiterated his view that the State should retain its majority ownership of AIB, where taxpayers currently own 71 per cent. “I believe strongly that Ireland should have State ownership of one of the banks and that should be AIB. We should stop selling off any more shares in AIB.”

Commenting on his decision to leave behind a distinguished 25-year career in Irish and European politics to head the BPFI, Mr Hayes said it would not defend wrongdoing by the industry. “My job is not to defend the banks . . . Not to be some apologist for the banks. It’s not my job to defend something that’s wrong, I won’t do that.”