INBS handed out 100%-plus loans before the crash, inquiry hears 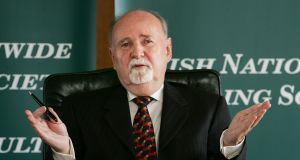 About 30 per cent of Irish Nationwide Building Society’s (INBS) commercial property loans had been given to property developers for more than 100 per cent of the value of underlying properties before the property crash, an inquiry into the now-defunct lender has heard.

The level of 100 per cent-plus commercial loans equated to €2.4 billion, Kelley Smith, a barrister with the legal team assisting the inquiry, told a hearing on Tuesday. She cited a document that was prepared by KPMG for potential bidders as the society was put up for sale in 2007. The planned sale was abandoned the following year as the global financial crisis hit.

Such loans included funds to cover the full cost of developers purchasing land, as well as stamp duty and planning expenses, she said, referring to the document.

However, the so-called vendor due diligence report highlighted that INBS’s management was of the view that the loan-to-value figures did not reflect the up-to-date value of the properties, including uplifts from projects progressing through the planning process.

Ms Smith suggested that this was a deficiency in INBS’s monitoring of loans.

The long-running inquiry, which began public hearings in December 2017, is looking into a number of alleged regulatory breaches by INBS between 2004 and 2008 – before the lender cost taxpayers €5.4 billion in bailout funds and was ultimately put into wind-down.

Earlier on Tuesday, the inquiry heard that a separate KPMG report, reviewing INBS’s commercial property lending in 2004 at the request of the Financial Regulator, highlighted that the society’s propensity to give 100 per cent loans to developers who agreed to share the profits from projects with INBS posed a risk to its loan book.

Loans with profit-share arrangements amounted to €6 billion in 2008, the inquiry has previously heard. Other features of such loans, including the fact that interest and principal payments were frozen until projects were completed, gave rise to additional risks of default, the 2004 report said.

Vincent Reilly, a partner with KPMG who was the lead author of the report, said on Tuesday that INBS’s then long-standing managing director, Michael Fingleton, was “unhappy” with the document’s comments on the additional risks.

He said that Mr Fingleton insisted on a sentence being added to the executive summary of the report, saying that INBS management were of the view that these loans were “highly unlikely” to have a detrimental impact on the society, given the prevailing global economic outlook and the controls the lender had in place.

The 2007 vendor due diligence report highlighted how the profit-share loans were helping INBS deliver higher profit levels – as a percentage of assets – than other Irish banks at the time. It noted that INBS had estimated that its profit-share agreements had the potential to deliver €750 million in additional returns to the society over time.

The inquiry has previously heard allegations that INBS did not have formal credit risk policies in place to cover profit-share arrangements.

1 Irish company paid €1.2m a year by collapsed Blumenthal-linked Australian restaurant
2 Hugo MacNeill steps back from Goldman Sachs role
3 Why bosses should not be afraid of speaking out on Instagram
4 Hammerson appoints lead for move into housing
5 Should AIB compensate me for upsetting letter on arrears?
6 Irish economy to grow by 3.4% this year, predicts EY
7 Tax shifts won’t drive multinationals out of Ireland - Moody’s
8 ‘Germans are very efficient and reliable. Cancelling is alien to them’
9 Poll on second election, concerns over Irish pension gap, and Ireland’s rich list
10 Setback for Tullow Oil as it plugs a well off the coast of Peru
Real news has value SUBSCRIBE