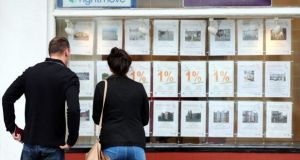 The number of new home buyers opting for fixed rates has jumped sharply in recent years.

The volume of new mortgage agreements fell year on year by 35 per cent in July as Covid-19 dented activity in the property market.

Figures from the Central Bank show new fixed-rate and variable contracts amounted to €556 million, considerably down on the same month last year.

Fixed-rate mortgages (including renegotiations) accounted for 76 per cent of all new agreements in the three months to July, the Central Bank said.

The ultra-low interest rate environment internationally has resulted in some lenders pricing fixed-rate loans lower than variable ones. Fixed rates are usually higher than variable rates, the premium reflecting the certainty the borrower is guaranteed.

They indicated the average rate charged on new mortgages here in July was 2.82 per cent, compared to a euro area average of 1.35 per cent.

While the rate varied considerably across countries. Ireland had the third highest mortgage interest rates across the euro area in February, the bank said.