Francesco Ceccato will take over from Kevin Wall, who is retiring after 40 years 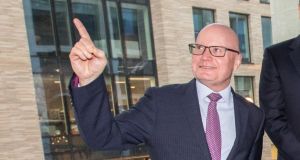 Barclays has picked Italian native Francesco Ceccato to head up its European hub in Dublin as current chief executive, Kevin Wall, prepares to retire later this year after 40 years with the UK banking giant.

The announcement was made internally on Tuesday morning.

The Irish unit, Barclays Bank Ireland Plc, became the group’s main European Union banking entity in 2018 as it prepared for Brexit. It is known internally as Barclays Europe. The Dublin business was originally established in 1979 and at the end of last year employed 1,563 across Europe, including 300 in Ireland.

Mr Ceccato joined Barclays from JP Morgan in 2010 and has held roles in corporate development and principal investments for the group. He most recently served as co-head of its European financial institutions group (FIG) business.

Mr Wall, a UK native, had worked with Barclays since graduating from university in 1981 and had worked in London, the US, Asia and Australia before taking over as chief executive of the Irish unit in 2017.

“Francesco brings a wealth of experience and a strong client focus, which will help to drive the continued success of Barclays Europe,” said Helen Keelan, chairwoman of Barclays Bank Ireland.

“He will lead a very strong and committed team that has established Barclays as a key player in our core business areas across Europe. I would like to thank Kevin for his excellent leadership over 40 years of service to Barclays, and to wish him the very best as he moves in to the non-executive chapter of his business career.”