Bank of Ireland gets green light for corporate restructuring 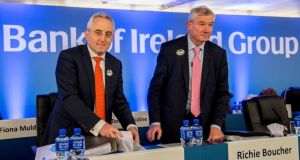 Bank of Ireland shareholders have approved a corporate reorganisation to establish a new listed holding company, and a consolidation of its shares that means it will no longer be a so-called “penny stock”.

The resolutions were approved at a testy extraordinary general meeting in Dublin on Friday, with the bank now planning to seek High Court approval to make the changes that are expected to take effect in June.

The corporate reorganisation was required by the European Union’s Single Resolution Board and the Bank of England to provide a framework for the bail-in of bondholders in the event of another financial crisis.

Deposits would continue to be held in the existing operating banks under the holding company, where they would enjoy greater protection.

The new structure involves Bank of Ireland Group plc being introduced as the listed holding company that will own the ordinary shares of the company and issue debt instruments.

In recommending the change in structure, Bank of Ireland chairman Archie Kane said a failure to implement it would have a “negative impact” on the group’s regulatory capital.

The resolution met with resistance from some shareholders, who argued that they had not been provided with sufficient information by the bank. Others questioned if their rights would be diluted by the change with a couple of shareholders calling for the meeting to be adjourned to allow for the matter to be considered further.

In response, Mr Kane said shareholders would have equivalent rights under the new structure.

In terms of the stock consolidation, shareholders approved the proposal to reduce the number of shares in issue.

For every 30 shares that investors currently hold, they will receive one share in the new listed holding company. Based on the closing price in Dublin on Friday, this would have the effect of multiplying its share price of 23.1 cent to €6.93, changing its current status as a so-called penny stock, Mr Kane said.

Separately, Mr Kane praised outgoing chief executive Richie Boucher for his role in saving the bank post the 2008 global financial crash, and said the board was “sorry” to see him go.

He said Mr Boucher had shown “intellect, energy and first-class leadership” in steering the bank through the crisis, keeping it out of majority State ownership, attracting substantial external investment and eventually returning the bank to profitability after a major restructuring.

“The results are clear to see,” Mr Kane said, adding that the bank “owes a lot” to Mr Boucher. “All of this was achieved in the face of serious headwinds and while enduring serious health issues.

“Richie, on behalf of the board, I thank you and wish you well in your future endeavours and we will be sorry to see you go later this year.”

Mr Kane made no comment on the status of the process to appoint a successor to Mr Boucher, who announced in March that he was stepping down later this year after more than eight years as chief executive.

In a trading update, Bank of Ireland said its new mortgage lending volumes rose by 30 per cent in the first quarter of this year when compared with the same period of 2016.

Overall, customer loan volumes stood at €78 billion at the end of March with new lending in line with expectations.

The bank said its pension deficit increased by about €200 million over the period to €650 million. It said this was largely due to a decrease in the “credit spread over risk-free rates on long-dated AA euro corporate bond yields” used by the group in the valuation of its defined benefit pension liabilities.

Mr Kane reiterated previous guidance that the bank intends to resume dividends payments to shareholders in the first half of 2018 in respect of the current financial year.