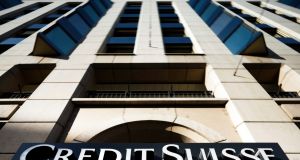 “We have decided not to pursue a partial initial public offering of our Swiss banking subsidiary Credit Suisse (Schweiz) AG, thus retaining full ownership of a historically stable income stream in our home market of Switzerland and avoiding complexity in the business structure and activities of a key division of the group,” the bank said in a statement on Wednesday.

A project that began in late 2015, the Swiss listing ran into opposition from analysts and investors, who questioned the merit of splitting a business that generates more pretax profit than other units. Credit Suisse’s shares have rebounded from a record low in July, making it more attractive for the bank to issue equity in the entire company.

Credit Suisse expects its common equity Tier 1 capital, a measure of its ability to absorb losses, to be 13.4 per cent following the capital increase of 4 billion francs (€3.7bn), which it will propose at an extraordinary shareholder meeting on May 18th.

European banks have rallied at the prospect that economic growth and rising interest rates could help revive earnings. However, Credit Suisse is still down more than 30 per cent from when chief executive officer Tidjane Thiam announced the initial public offering plan in October 2015.