Accountant has previously worked for IBRC, Intel and Kerry Group 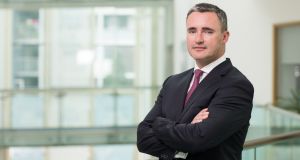 Mr D’Arcy had been director of finance at the Irish unit of the Belgian bank-insurance giant since 2013, having previously worked for Irish Bank Resolution Corporation, Intel and Kerry Group.

The accountant succeeds Luc Cool, who had been with the KBC Group for more than two decades before taking on the KBC Bank Ireland chief risk officer position two years ago. Mr Cool left the group this year to join Amret MFI, a Cambodian micro-finance institution, according to his LinkedIn profile.

KBC Group reaffirmed its commitment to Ireland earlier this year, drawing a line under two years of speculation about the bank’s plans for the unit in Dublin.

“We congratulate Barry on his new role with KBC,” said KBC Bank Ireland chief executive Wim Verbraeken. “He brings a wealth of experience to the role and will be invaluable in ensuring that KBC manages and develops the risk and compliance side of our business as we grow in Ireland.”

1 Coronavirus: Notion of a rapid economic recovery is at best wishful thinking
2 Nice to see you: Which is the best video calling option around?
3 Makhlouf running Central Bank from Greek lockdown
4 Coronavirus applies ‘handbrake’ to Irish property market
5 Covid-19 crisis puts value of the modern-day office into focus
6 NTMA to raise billions of euro for State in bond sale amid Covid-19
7 Mater hospital turns to robots to help in battle against Covid-19
8 Coronavirus: Journal Media to cut pay by up to 20 per cent
9 Fierce backlash to Dutch hard line on eurobonds
10 Mother of invention: the new gadgets dreamt up to fight coronavirus
Real news has value SUBSCRIBE