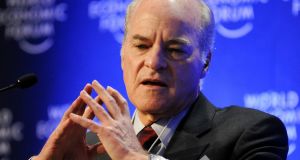 Kohlberg Kravis Roberts on Monday named two senior executives, Joseph Y. Bae and Scott C. Nuttall, as its co-presidents and co-chief operating officers. The appointments will charge Nuttall (44), and Bae (45), with essentially running the $137 billion firm on a day-to-day basis.

“Today’s announcement is about the future and ensuring we have the right team and leadership structure to serve our clients and partners for decades to come,” Kravis and Roberts said in a statement.

In effectively naming their successors, Kravis and Roberts are joining other buyout titans in preparing for the days when they step away from the business. However for Kravis and Roberts, the anointment of potential successors is perhaps more notable than for most.

The men, cousins who co-founded Kohlberg Kravis 41 years ago, helped put private equity on the map. The pair led the firm’s pursuit of RJR Nabisco and earned the immortal sobriquet “barbarians at the gate.” Since then, the private equity industry has largely shed its reputation as uncouth raiders and become an enormous industry, with some $820 billion in uninvested capital as of Dec. 31, according to Prequin.

In recent years, the two men have praised the firm’s growing bench, with Kravis once saying that any of 15 executives could lead the firm should he and his cousin retire. Among those individuals were Nuttall and Bae. Now they will oversee the modern KKR day to day, splitting the responsibilities. Bae, who joined the firm from Goldman Sachs Group in 1996, will take over the private equity business and the asset management operations that touch energy, infrastructure and real estate. Among his signature achievements was building out the firm’s Asian operations.

And Nuttall, who previously was at Blackstone, will handle KKR’s debt investing, hedge funds and its growing capital markets unit, as well as corporate development and initiatives for expanding the firm. He has already become a familiar face on Wall Street, having spoken often on the firm’s earnings calls with analysts and having helped shepherd the firm onto the public stock markets.

The two co-presidents will also join the board of Kohlberg Kravis. Kravis and Roberts will remain co-chairmen and co-chief executives.