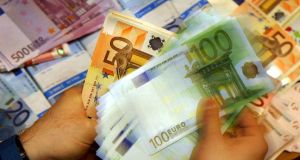 The number of completed venture financings in the Republic has dipped to a new low for the past five years, according to the latest quarterly report on global trends from KPMG.

Venture financing is when capital is provided by full-time, professional firms who invest in start-ups that have the potential to develop into significant businesses. The financier typically seeks board membership and equity in the company rather than repayment.

The KPMG report said that despite the dip, investments of this type “remained robust” with €97 million recorded in the quarter, down from €106 million in the first quarter.

This was largely owing to the €57 million financing of Dublin-based Iterum Therapeutics.

Despite the fall, the figures remain on par with global trends where just 1,310 deals were completed during the quarter – down from 2,716 in the first quarter.

KPMG partner Anna Scally said the figures for Ireland follow a global trend in which the number of deals was down quarter on quarter, but the value remained robust.

“This is indicative of investors becoming more discerning at the early stage of new investments while investment continues to accelerate in later-stage companies,” she said.

“Ireland is working to provide a conducive environment for long-term value creation and is not just focusing on start-ups.

“That said, the market also views early-stage, disruptive technologies and concepts as an opportunity to jumpstart innovation in their business.

“As the external environment continues to present some challenges, Ireland remains largely competitive and continues to be seen as a global player, particularly in the fintech space.”

Ms Scally highlighted the work of TechIreland in mapping companies together in the research and development sector.

“One really interesting initiative which is up and running is TechIreland which aims to be the definitive source of data and insights on Irish innovation globally,” she said.

“They are doing that by mapping the companies that are engaged in deep engineering and research and development.

“This should help companies gain better visibility and stronger prospects for funding, while helping to bring together research and development initiatives across the tech ecosystem.”

Corporate venture capital investment as a percentage of total deal count spiked to 17.6 per cent, representing the highest percentage this decade and almost $20 billion in associated deal value globally.