World’s largest asset manager attracted a record $74bn during the most recent quarter while assets under management jumped 16% to nearly $5.7 trillion 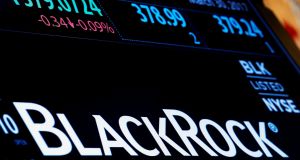 The world’s largest investment firm, BlackRock Inc, reported second-quarter results on Monday which failed to impress Wall Street as it cut fees to lure a wave of investor cash into its exchange-traded funds (ETFs), sending shares down 3 per cent.

Investors of all types have been piling into ETFs and dumping more expensive alternatives, and BlackRock’s fees have raced toward zero on some products while competitors like Vanguard Group and Charles Schwab Corp offer ETFs at or near the cost of managing them.

The New York-based company’s largely index-tracking iShares ETFs pulled in a record $74 billion(€64.5 billion) during the most recent quarter, up from $16 billion a year earlier. Overall flows totaled $104 billion, compared to just $7 billion a year ago.

Assets under management jumped 16 percent to nearly $5.7 trillion, but revenue gained just 6 percent to $2.97 billion and earnings per share rose 10 percent to $5.22, or $5.24 after adjusting for non-recurring items and other charges.

That fell short of analysts’ average target of $5.40 per share and $3.02 billion in revenue, according to Thomson Reuters, and the company acknowledged that fees were lighter due to “previously announced pricing changes.”

The company’s shares were last down just over 3 percent at $425.12 on Monday morning.

BlackRock announced a major cut for its ETFs last October and just last week lowered fees to $9 a year from $27 for every $10,000 an investor holds on a $10 billion iShares mortgage-backed securities ETF.

BlackRock Chief Financial Officer Gary Shedlin said on a conference call that the company has recouped “over 75 percent” of lost revenue from the October fee cuts due to growth.

The company also expects more money to roll into the MBS fund as the Federal Reserve is expected to let its own holdings roll off its balance sheet starting this year.

Already benefiting from a move by advisers to use low-fee products, BlackRock has been looking for growth from burgeoning groups of clients, such as insurers.

Chief executive Larry Fink said on a conference call with analysts that the ETF industry’s growth potential reminded him of his younger days in the 1970s developing the mortgage-backed securities market.