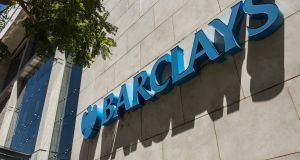 The Central Bank of Ireland and Barclays are in talks for the UK bank’s Irish unit to function as Barclays’ European Union hub following Brexit.

“Barclays Bank Ireland, which has a banking licence and which we have operated for almost 40 years, provides a natural base,” Barclays said.

The Central Bank said while it “cannot comment on supervisory matters, we can confirm that we have engaged with Barclays Bank Ireland on expansion of its services”.

The further use of the Irish unit, which has about 100 staff, will allow Barclays to offer banking services in other European Union countries under “passporting” rules. Post-Brexit, it is expected that these rules will no longer be extended to UK-based banks.

Barclays has agreed terms on a lease for new premises on in Dublin that would be capable of accommodating about 400 staff, although the parent group has not confirmed any specific numbers in terms of potential new jobs for Dublin.

It is understood to have agreed a €500,000-a-year lease with Green Reit for One Molesworth Street, a high-profile development under construction on the corner of Dawson Street, opposite Davy stockbrokers.

If Barclays moves to the building, it will be adjacent to a planned new Dublin restaurant for prestigious London restaurant The Ivy.

IDA Ireland welcomed the statement by Barclays, and said it plans to work “with Barclays to support their expansion” here.