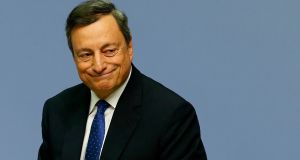 Mario Draghi: the ECB president is unlikely to backtrack, but may temper or at least nuance the message to keep markets at bay.

The European Central Bank is expected to lay the groundwork for an autumn policy shift on Thursday, emphasising improved growth while tempering expectations after previously setting off a mini tantrum in financial markets.

ECB President Mario Draghi opened the door to policy tweaks in a speech in Sintra, Portugal, last month that was viewed as unexpectedly hawkish, sending the euro and government bond yields rallying.

Draghi is unlikely to backtrack, but may temper or at least nuance the message to keep markets at bay.

“Today’s meeting is a perfect opportunity to jawbone markets back in line if it [the ECB] wishes to do so,” said Kenneth Broux, an analyst at Societe Generale.

With the end of unprecedented central bank stimulus now within sight, financial investors are nervously sifting through clues, trying to gauge how big central banks around the globe will unwind unconventional policy that has kept borrowing costs at rock bottom.

A key discussion for the ECB on Thursday may be whether policymakers should remove their pledge to increase the volume or duration of asset buys if the outlook worsens, a topic already discussed in June when further rate cuts were ruled out.

Such a move was seen by some as a foregone conclusion until Draghi argued in Sintra that improved growth may provide room for the ECB to tighten policy.

But policymakers speaking to Reuters earlier voiced concern about doubling German 10-year yields and the euro’s 3 per cent rise, fearing that a fresh signal now may be self-defeating, pushing up borrowing costs and thwarting a broadening but still relatively young recovery.

The euro was hovering just below a 14-month high on Thursday.

“There are good reasons why the ECB is warming up for a tighter monetary policy stance, but the degree of euro strengthening suggests that the speculation has moved a bit ahead of itself,” said David Kohl, a currency strategist at Julius Baer.

The ECB has to resolve an apparent disconnect between weak inflation and improving growth.

Buying trillions of euros worth of bonds to cut borrowing costs, it has fought off the threat of deflation and helped rekindle growth, now on its best run in a decade.

But inflation, its chief focus, will continue to undershoot its target of almost 2 per cent at least through 2019, indicating that even if it eased off the accelerator, easy monetary policy will continue for years to come.

Most analysts polled by Reuters expect no change on Thursday but a sizable minority predicted a tweak in the bank’s guidance with a compromise possible on axing a bias for increasing purchases but not in the case of the extension.

While the bank is not under pressure to make a call on the future of asset buys now, they are now set to run until the end of the year.

So by September, or October at the latest, policymakers have to decide whether to extend the buys or wind them down in a process called tapering.

Most economists polled by Reuters expect tapering from next year but unlike the US Federal Reserve, which cut buys at each meeting when it ended its own asset buys, the ECB could simply extended the buys at a lower volumes to avoid creating an impression that it was on a preset course to wind down the buys.

Indeed, policymakers told Reuters earlier that they would not want to put an end date on the buys or a schedule on tapering, maintaining flexibility and avoiding a perception that it was on a preset course.

“The ECB will have to substantiate the tapering preparation with economic arguments that do not leave market participants completely stumped; a balancing act that requires all of Draghi’s verbal acrobatic skills,” said ING economist Carsten Brzeski said.

1 In praise of Gogglebox Ireland, an essential service in all but name
2 Aerogen targets record €100m in revenues
3 Policy failed us during the banking crisis and it’s failing us again
4 Aryzta to pursue asset sales as takeover talks fail
5 How long can Government afford to keep State pension age at 66?
6 Retailers accused of ‘stealing business’ from rivals by flouting restrictions
7 Outgoing Irish a sitting duck for Covid
8 Samsung patriarch Lee Kun-hee dies at 78
9 How to . . . transfer your game data to a new console
10 Banks urge borrowers facing hit from new restrictions to engage
Real news has value SUBSCRIBE