JP Morgan Chase sets aside $10.5bn to deal with defaults 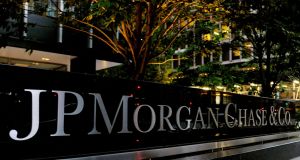 JP Morgan Chase & Co on Tuesday set aside about $10.5 billion (€9.2 billion) in reserves to cover a wave of potential defaults in the aftermath of the Covid-19 pandemic as the largest US bank reported a smaller-than-expected 51 per cent drop in second-quarter profit.

The bank’s net income fell to $4.69 billion, or $1.38 per share, in the quarter ended June 30th, but topped analysts’ lowered estimates of $1.04 per share, sending its shares up 4 per cent in premarket trading.

The scale of expected loan losses at the bank is a major barometer of the health of the US economy, as the coronavirus pandemic drives up unemployment and puts pressure on businesses.

“Despite some recent positive macroeconomic data and significant, decisive government action, we still face much uncertainty regarding the future path of the economy,” chief executive officer Jamie Dimon said.

Mr Dimon also said the bank will continue to pay dividend unless “the economic situation deteriorates materially and significantly”.

While JP Morgan Chase’s stock nudged upwards as a result of the smaller-than-expected fall in profit, two other US banks saw their stocks fall after reporting quarterly earnings.

Wells Fargo & Co dropped 5.5 per cent after booking a quarterly loss for the first time since the 2008 financial crisis, while Citigroup also declined as it reported a steep fall in its quarterly profit.

Wells Fargo said it was setting aside $9.57 billion to cover potential loan losses and slash its dividend, derailing efforts to recover from a sales scandal. The bank’s earnings have suffered since the start of the Covid-19 pandemic as it does not have a strong capital markets business to lean on like its Wall Street peers.

“We are anticipating weak results for Wells. These were awful,” said Edward Jones analyst Kyle Sanders.

“This will be the toughest quarter for the banking industry since the financial crisis in 2008, and Wells results will be the worst of the bunch as the Fed’s asset cap makes an already challenging environment even more difficult,” he added.

Citigroup’s revenue from fixed-income trading surged 68 per cent, beating the most optimistic analyst estimates and keeping the bank solidly profitable in the second quarter as it set aside $7.9 billion for souring loans.