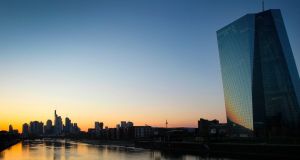 The European Central Bank said consolidation ‘may boost the low profitability of euro area banks by helping them achieve economies of scale, become more cost-efficient and improve their capacity to face a future that is increasingly digital and definitely global’. Photograph: AFP

The European Central Bank (ECB) has redoubled its efforts to encourage mergers and acquisitions in the euro zone banking sector by seeking to tackle market myths and launching a public consultation on its approach to consolidation.

“ECB Banking Supervision has stated several times that a certain degree of consolidation would be useful in addressing some of the structural challenges that euro area banks are currently facing,” said Edouard Fernandez-Bollo, a member of the institution’s banking supervisory board, in a blog marking the launch of the consultation process.

“It may boost the low profitability of euro area banks by helping them achieve economies of scale, become more cost-efficient and improve their capacity to face a future that is increasingly digital and definitely global.”

While the Covid-19 economic crisis is likely to stall mergers and acquisitions (M&A) ambitions of banks in the near term as the sector deals with an expected surge in bad loan losses, the fallout may act as a catalyst for deals once the worst has passed, according to industry observers.

In the Republic, Permanent TSB – which had the lowest level of profitability among domestic banks heading into the crisis – has been mooted as an M&A candidate for more than a decade. Ulster Bank and KBC Bank Ireland are often seen as potential partners.

The ECB has long pressed for consolidation in the European banking market, which remains more fragmented and weaker than in the US, arguing that it can help companies to diversify their sources of income, contribute to the banking union project, and make the euro area more resilient to shock events.

However, the ECB, which has overseen the euro zone banking sector since 2014, must assess each deal on its merits. This has led to some negative perceptions in the market about ECB’s stance on various consolidation issues, which the authority is seeking to address in a draft guide that has gone out to public consultation until October 1st.

The ECB highlighted that it will not penalise banks seeking to merge and that have “credible integration plans” with demands that they hold higher levels of expensive regulatory capital in reserve.

Mr Fernandez-Bollo also said that the ECB will “recognise, in principle, duly verified accounting badwill” from a capital accounting point of view when assessing mergers. So-called badwill, sometimes referred to as negative goodwill, is booked as an extraordinary gain in a merger when one or both companies are trading in the market at a deep discount to their book value – or how they value their own assets.

Still, Mr Fernandez-Bollo said: “We expect badwill to be used to make the business model of the combined entity more sustainable, for example by increasing the provisioning for non-performing loans, or to cover transaction costs, integration costs or other investments. We also expect the potential profits from badwill not to be distributed to the shareholders of the combined entity until the sustainability of the business model is firmly established.”

The ECB said it hopes its draft guide – also covering issues surrounding internal accounting models – will “provide clarity about how we assess the risks and benefits of the consolidation projects submitted to us”.