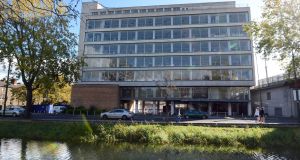 The coronavirus pandemic will delay the wind-up of Anglo Irish Bank and Irish Nationwide Building Society by a year to the end of 2022, the special liquidators of the failed lenders said.

In their seventh update report submitted to the Minister for Finance, liquidators Kieran Wallace and Eamonn Richardson of KPMG have estimated that liquidation costs will reach between 304 million and €313 million, up from between €291 million and €306 million estimated a year ago.

The delay in the liquidation of Irish Bank Resolution Corporation, the entity winding up the boom-time lenders, is “largely attributed to the ongoing impact of Covid-19 which has resulted in delays to court proceedings and asset realisation strategies,” the department said.

Coronavirus is estimated to add between €11 million and €14 million in fees.

The latest report in the seven-year-old liquidation of the lenders, nationalised after the 2008 banking crash, shows that fees incurred in the wind-up of Irish Bank Resolution Corporation totalled €19.4 million in 2019 – up from €10.8 million the previous year.

This brings total fees to €277 million since February 2013 in the largest liquidation of a corporate entity in the history of the State.

KPMG is biggest recipient of fees, being paid €175 million, followed by law firms A&L Goodbody and Linklaters which were paid €41.7 million and €20.6 million respectively.

The liquidators are forecasting further fees totalling between €27.5 million and €36 million to complete the liquidation over the remaining 18-month timeframe.

It is estimated that KPMG would be paid between €21.5 million and €27 million of these fees with legal and professional advisers costing between €6 million and €9 million.

The liquidators say the estimated timeframe and fees are dependent on coronavirus restrictions being lifted in a timely manner, allowing legal cases proceed with minimal delays and current economic conditions not delaying the sale of remaining assets by more than six months.

There is still a residual loan book of about €3.5 billion that must be wound down.

The estimates are conditional on the conclusion of about 50 sets of legal actions that IBRC is party to and any appeals heard within the projected period and there being no new material regulatory reviews or investigations requiring IBRC to establish a special project team.

Referring to the likely impact of the virus on the liquidation, Minister for Finance Paschal Donohoe said: “I understand these challenges and I am confident the outstanding tasks will be completed to the same high standards we have seen over the last seven years.”

The collapse of Anglo Irish Bank and Irish Nationwide cost the State €34.7 billion when they failed in 2009.

The banking crash and subsequent economic crisis forced the government to seek a €67.5 billion international bailout from the European Union, the International Monetary Fund and the UK, Sweden and Denmark in late 2010.

Just over a year ago, the IBRC liquidators brought forward the estimated end of the liquidation by the year to the end of 2021 after they settled long-running litigation with the family of Fermanagh businessman Sean Quinn over lending by Anglo. Coronavirus has now reversed that plan.

A review conducted by consultants RSM, commissioned by the department, that KPMG’s liquidation fees are “within a general broad range charges across a sample of comparable insolvencies of a similar or larger scale” based on duration and financial assets and liabilities.

The consultants found that the hourly charging rates of the liquidators are “lower or at the lower end of the range of Irish court-approved rates, lower than average UK insolvency practitioner rates and lower than rates charged on comparable insolvencies”.