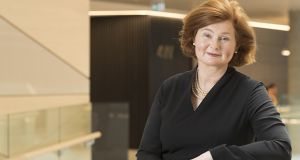 Derville Rowland: “We believe that creating a more diverse and inclusive workplace is both the right thing to do and the smart thing to do.”

A lack of diversity at senior levels in financial institutions leads to increased risks, the director general of financial conduct at the Central Bank, Derville Rowland has said.

Speaking at the Women in Leadership conference in University College Dublin, Ms Rowland noted that to the end of 2017, men had been appointed to nine out of 10 of the most senior and influential roles in Irish retail banks.

Noting that some commentators have previously blamed the lack of diversity in the sector for the global financial crisis, she said the Central Bank wanted financial institutions to be sufficiently diverse and inclusive, so as to prevent group-think, guard against overconfidence, and to promote internal challenge.

“Let me be very clear that the Central Bank considers a lack of diversity at senior management and board level to be a leading indicator of heightened behaviour and culture risks in financial institutions,” she said.

She said the regulator had ordered Irish banks to submit a diversity strategy and implementation plan by last November.

“We have found varying levels of commitment demonstrated in the plans we have received to date. But we are keeping up the pressure. Why? Because the evidence points to better outcomes,” said Ms Rowland.

“We believe that creating a more diverse and inclusive workplace is both the right thing to do and the smart thing to do,” said Ms Rowland.

A study carried out by the International Monetary Fund (IMF) last year revealed that women are under-represented at all levels of the global financial system, from depositors and borrowers to bank board members and regulators.

It showed that women accounted for less than 2 per cent of financial institutions’ chief executive officers and less than 20 per cent of executive board members. The proportion of women on the boards of banking-supervision agencies was also low – just 17 per cent on average in 2015.