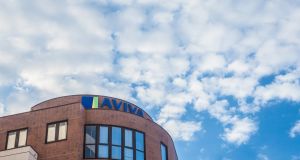 ‘Declan O’Rourke is CEO of Aviva’s general insurance business, John Quinlan has left the business,’ a spokeswoman for Aviva said in response to questions from The Irish Times

Aviva Insurance Ireland has confirmed the departure of its former chief executive John Quinlan, who went on leave from the general insurer more than a year ago.

Mr Quinlan launched legal proceedings against his employer in July, but court filings show that he has dropped the case, with a so-called notice of discontinuance having been filed with the High Court on Monday.

The suit came within weeks of it emerging that Declan O’Rourke, then general manager of US insurance giant AIG’s Irish business, had been tapped to become the next chief executive of Aviva’s Irish arm.

“Declan O’Rourke is CEO of Aviva’s general insurance business, John Quinlan has left the business,” a spokeswoman for Aviva said in response to questions from The Irish Times.

The insurer, a unit of the London-based Aviva group, declined to comment on whether a settlement had been reached with Mr Quinlan. Neither Mr Quinlan nor his solicitor responded to efforts to secure comment from them.

The Irish Times first reported in November last year that Mr Quinlan was on leave from his position.

The legal proceedings were the first public confirmation of a breakdown in relations between Aviva and Mr Quinlan, who joined the company as general insurance managing director in 2013 from RSA Insurance Ireland, where he was the sales and marketing director.

He was named chief executive of Aviva Ireland in November 2016, becoming its seventh head in a decade.

The business was reorganised in September 2019 to align itself with the structures of the Aviva group. This eliminated the position of Aviva Ireland chief executive and left Mr Quinlan in charge of the general insurance business, Aviva Insurance Ireland, with the life and pensions business, Aviva Life & Pensions Ireland, headed up by another executive.

Aviva announced in July that Dave Elliot, who has been with the group for almost a decade, was taking over as chief executive of the life and pensions division, succeeding Tom Browne, who joined the business in 2018 through the acquisition of Friends First. Mr Browne retired the following month after 40 years working in the insurance industry in Ireland.