Some €1.9bn was spent online using credit and debit cards in the year to September 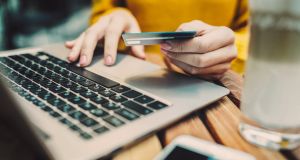 Irish consumers have a growing fondness for online purchases, according to Central Bank data, having increased their internet spending by 25 per cent to €1.9 billion in the year to September.

Some €1.4 billion of the September 2019 outlay was spent via debit card spending.

The increase in spending via debit cards was quite broad-based, with retail and services sector sales posting strong rises. But the highest growth was in the restaurants, dining and entertainment sectors, which saw spending rise 24 per cent to almost €256 million.

More than half of the 11 per cent increase in card spending seen in retail was attributable to groceries and perishables.

For credit cards, spending was mainly split between the retail and services sectors. Total spending in the social sector rose 23 per cent during the period to €93.1 million.

Expenditure by Irish tourists abroad accounted for 10 per cent of total debit card spending and 19 per cent of credit card expenditure in the third quarter.

At the end of the third quarter there were 6.2 million debit and credit cards in the State.