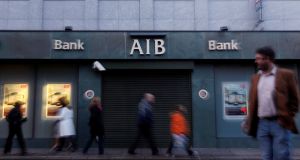 All told, the bank has sold €4.3 billion of senior and junior debt within the past two years.

AIB has boosted its prospects of paying a special dividend next year to shareholders, led by the State, after the bank sold €500 million of bonds this week that will underpin its capital position, according to analysts.

The 71 per cent State-owned lender sold the so-called Tier 2 bonds, which are due to mature in 2029, to carry an interest rate of 1.88 per cent. The sale attracted strong demand, with bids from investors for seven times the amount of debt that was on offer, the bank said in an internal email, circulated on Wednesday.

Davy analysts Diarmaid Sheridan and Stephen Lyons said in a note to clients that the debt sale lends “further support” to AIB’s discussions with regulators about the commencement of returning of excess capital on its balance sheet to investors.

“We retain the view that AIB will be in a position to begin to return surplus capital in the first half of 2020 and continue to assume that this first occurs through a€300 million special dividend,” they said.

All told, the bank has sold €4.3 billion of senior and junior debt within the past two years that can be bailed in should the bank go through another crisis. That equates to 86 per cent of such debt that the bank is required to issue under new European rules designed to prevent taxpayer bailouts and protect depositors in the event of banks running into trouble in future.

AIB required a€20.8 billion bailout during the last crisis and has so far returned a little over half of that amount to the Government.

The Tier 2 bond sold this week secured “260 orders from 29 countries and there was a very diversified book in terms of investor type and geographical spread,” according to the email.

AIB signalled last week that it plans to shed more than 300 jobs this year to rein in costs as a “very challenging” interest rate environment internationally is squeezing lending margins and income.

The bank, which had 9,831 employees at the end of last year, said that its net interest margin – the difference between the average rates at which it funds itself and lends to customers – contracted by 0.11 percentage points during the third quarter to 2.32 per cent.