Irish politicians must do more homework before shouting about mortgage rates 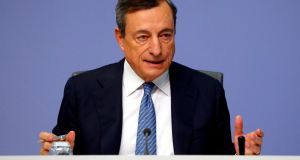 European Central Bank (ECB) president Mario Draghi did his homework before he became, on Thursday, the first sitting head of the organisation to appear before the Oireachtas finance committee. It’s a pity some of the TDs and Senators asking the questions didn’t do theirs.

The wily Italian was prepared for criticism that the ECB bullied the State by not allowing it to impose losses on bank bond investors during the financial crisis, and that it effectively bounced the then government into an international bailout in 2010.

He retorted that the ECB’s emergency funding for Irish lenders, equivalent to the size of the economy at one stage, was “unprecedented” – and that he saw Thursday’s conversation as an “opportunity to mend a relationship that has been fraught”.

When asked about the state of the Irish housing market, Draghi said his “understanding” was that “constraints to supply” of homes is fuelling construction growth again, which should ultimately deliver “less price pressure on housing”.

And so, the ECB president of eight years also had a ready reply when committee members asked him why the average standard variable home loan in the State – at 3.08 per cent for a new loan in September, compared to 1.76 per cent across the wider euro area – is so high.

It was largely down to the fact the State has a “quasi-monopoly” banking market that is “not competitive”, he said. AIB and Bank of Ireland now control about 60 per cent of the Republic’s mortgage market, not helped by the retreat of boom-time foreign-owned banks like Bank of Scotland and Danske Bank during the crisis.

“If the Government can take action to reduce the degree [of] the presence of a monopoly, that would be welcome,” Mr Draghi said.

There was little evidence that, in advance of Draghi’s appearance, members of the committee bothered to review his critical assessment of some of the proposals put forward by committee members during the current Oireachtas, ostensibly aimed at helping hard-pressed Irish mortgage holders.

Like Draghi’s response in late 2016 to a request from then taoiseach Enda Kenny and the Oireachtas finance committee chairman John McGuinness for an opinion on Opposition proposals to give the Central Bank powers to limit variable mortgage rates.

Mr Draghi penned a 15-page letter at the time, warning that the measure “could potentially render the market less attractive and discourage new entrants”.

“This would lead, instead, to lower competition in financial services in Ireland, effectively defeating the purpose of the draft law,” he said, adding that the plan may also force banks to push up the costs of other types of loans.

Another Opposition Bill – this time to regulate so-called vulture funds that have been buying up distressed Irish loans since the crisis – received a cautious response from Mr Draghi, when the Government and Oireachtas finance committee sought his views earlier this year.

The ECB president wrote in June that his organisation is a “strong proponent” for the development of a market where non-performing loans can be traded. He added that if the proposed laws put off potential buyers of Irish loans, it would “increase pressure” on banks to “adjust their own strategy” for managing distressed loans and “determining interest rates, which may not ultimately benefit borrowers”.

(The Irish Central Bank has consistently argued that borrowers’ existing rights travel with them when their loans are sold on, and that laws enacted in 2015 regulating firms that manage loans on a day-to-day basis on behalf of vulture funds offered sufficient additional protections.)

AIB and Bank of Ireland, both bailed out during the crisis, are forecast by analysts to post a combined €1.8 billion of net profits this year, marginally higher than what they earned in 2017. These are, of course, galling figures to stomach for any mortgage holder high rates – or who has witnessed the behaviour of banks during the €1 billion tracker mortgage scandal.

And while some non-bank lenders such as Dilosk and Finance Ireland have set their sights on mortgage lending in recent times, there are no signs of major overseas lenders beating a track here to inject real competition.

The Irish market is not offering over-the-odds returns to lure new entrants. The purest measure of Irish banks’ profitability – their return on equity, or net assets of their business – is broadly in line with the European average. It currently stands at 7.2 per cent for Bank of Ireland and 8 per cent for AIB, compared to the EU average of 7.5 per cent, according to Bloomberg data.

One of the biggest turnoffs for any bank looking at the Irish market, according to Davy analyst Diarmaid Sheridan, is the fact that it is difficult for lenders to get hold of a home with the borrower is in default.

Then there is the small size of the market, where less mortgage business is written in a year than in a month in the UK; and the fact that banks in most other countries make tidy sums charging set-up fees for new loans, whereas some banks here are offering 2 per cent cashback incentives, he says.

Irish banks, due to the scale of the crash and fact that they continue to hold high levels of non-performing loans, are being forced by regulators to hold considerably higher levels of expensive capital for mortgage lending than many of the European peers. New entrants would face the same hurdle.

Irish authorities decided that wholesale repossessions would not be tolerated even as borrowers defaulted in their tens of thousands during the crisis. It maintained a level of social cohesion that has, arguably, helped the recovery.

But higher mortgage rates are one of the costs.